Stuttgart (dpa / lsw) – The lesbian and gay association (LSVD), the education union GEW in Baden-Württemberg and the Greens in the state parliament are calling for studies on the topic of sexual diversity in schools. A good five years after the protests against an educational reform and the introduction of the so-called guiding perspective “Education for tolerance and acceptance of diversity”, which should apply to all subjects in general schools, they see major deficits in implementation.

There is hardly any help for teachers, criticized the GEW. The topic also played no role in the training courses for the introduction of the educational plans. Therefore, a well-founded evaluation is important immediately. It is unacceptable that topics on homosexual, bisexual, trans and intersex people as well as transgender and queer people (LGBTTIQ) are not mentioned in a guide to democracy education or in a brochure on violence and bullying prevention. “This is incomprehensible against the background of the unambiguous research findings that sexual and gender identity are a major reason for discrimination in schools,” complains the union.

“Gay pig must no longer be one of the most frequently used swearwords in German schoolyards,” said GEW regional director Monika Stein. In order to be able to deal competently with the topic, teachers urgently need training, materials, sample curricula and media lists as well as cooperation with extracurricular projects.

The Greens MP Brigitte Lösch thinks a study that examines the situation of young people in schools makes sense. “Because where well-founded information is available, we can act in a targeted manner,” said the spokeswoman for the group for LGBTTIQ issues and chairwoman of the education committee. School psychologists and counseling teachers urgently need a handout on how to deal with LGBTTIQ. “The project was on hold in the Ministry of Education for years. That shows how little importance the topic has for the Minister of Education.”

It is important to make LGBTTIQ lifestyles visible in school too. “Talking about it in class can make it clear: Yes, there are people who love the same sex. Yes, there are children who grow up with a gender in which they do not feel at home,” said Lösch. That is important against prejudice and bullying.

According to the ministry, a handout for school psychologists and counseling teachers should be ready shortly. Furthermore, school psychologists have been trained in sexual diversity and identity in order to support teachers with such sensitive questions. Because of Corona, however, a course was canceled.

When the previous green-red government wanted to regulate the issue of sexual diversity in class with a new education plan, this triggered violent protests in 2015/16. The action alliance “For marriage and family – stop gender ideology and sexualization of our children!” called for “demos for everyone”. Counter-demonstrators supported the policy of equality for homosexuals and heterosexuals. The curriculum now states, among other things, that students can “deal with different forms of love and sexuality in the field of tension between freedom, responsibility and self-determination”.

Kerstin Fritzsche from the LSVD board said: “We don’t even know whether this will be implemented.” There are always indications that this is not the case. A study is needed to verify that. “The assumption is that nothing has improved,” said Fritzsche. Students and teachers are still afraid of coming out.

Who should recruit the volunteers? 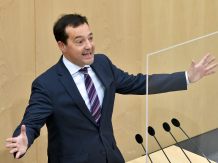 Filming for “Celebrities under Palm Trees” started in Thailand