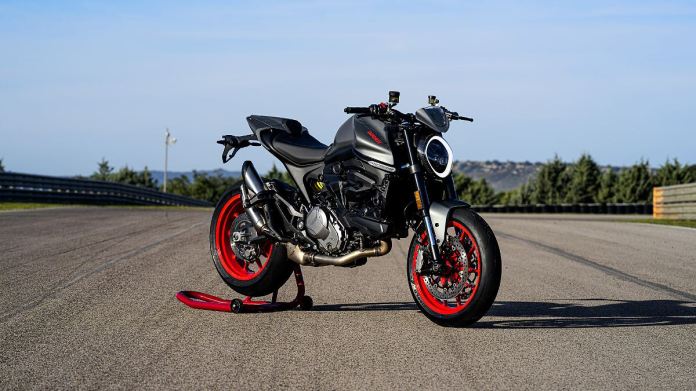 While some are unpacking the scalpel, others send the monster. For the 2021 season, Ducati has cast its successful bike in a purist form, reduced the weight and completely upgraded its technology. All in all, that promises a real power-naked bike.
Ducati has not only presented its last new model for the 2021 season with the new Monster, the Italians have also unpacked a real hammer with the naked bike, which keeps the numbers of the “best-selling model of all time” – 350,000 units to date – in likely to go up.

To ensure this, Ducati has returned to the basic idea of ​​the monster. That is in 1993. Even then, the Monster 900 was a very puristic and sporty motorcycle. The concept was very simple, the engine of a super sports car was forged very elegantly into the frame of a superbike, which then also supplied the chassis. One of the first naked bikes was born with the features of a street fighter.

If you look at the design of the new monster, there is not much left of what Miguel Galluzzi once drew in the original model. But that doesn’t really matter in view of the new, absolutely sharp line. The front alone, with its round headlights framed by LED daytime running lights, is ahead of the times. In the sideline, the tank arches up in the classic bison back shape, while the rear purist lets the double tailpipes on the right side and the 180 rear wheel take the stage.

Exactly this concept of simplicity also serves as the basis for the technology of the new Ducati Monster. Like the super sports sister V4, the new Monster has an aluminum front frame, while the well-packaged propellant comes from the super sports. The L-shaped two-cylinder draws 111 hp from 937 cubic centimeters and provides a maximum torque of 90.5 Newton meters.

The peak power is 2 HP and the torque 4 Newton meters higher than that of its direct predecessor, the Monster 821.Ducati promises significant improvements, especially in the lower to medium speed range – which should cheer everyone who drives a Monster more often through city traffic have to, because that wasn’t a pleasure in all respects. The Quick-Shifter, which is fitted as standard with the new gear and works up and down, should also ensure more fun.

Only the weight went down. The aluminum front frame alone, which, like the Panigale V4, is attached directly to the cylinder heads, saved 4.5 kilograms compared to the tubular space frame used on the predecessor. The monsters lost more pounds on the rims, the swing arm and on the rear subframe. Overall, Ducati was able to reduce the weight of the 821 by 18 kilograms. Which in the end only means that the monster starts the race with a ready-to-drive weight of 188 kilograms and is now fighting at bantamweight.

Even with launch control

On the other hand, the monsters are a heavyweight in the electronics program. In addition to three driving modes, adjustable cornering ABS, traction control and wheelie control, there is even a launch control for a race start that is suitable for the race track. All functions can be controlled via a 4.3-inch TFT color display from a sitting position that is comfortable even for drivers who are not so tall. Ducati has lowered the standard bench seat to a height of 820 millimeters. Those whose legs are now a little shorter can order a low bench with a height of 800 millimeters or lower the whole thing to 775 millimeters with the help of a special lowering of the chassis.

But not only the seat height and weight, but also the tank, which has shrunk to 14 liters and is therefore significantly slimmer, and the wheelbase reduced to 1.474 meters should ensure better handling. The shaking of the road is absorbed at the front by a USD 43 fork and at the rear, as usual, by a directly hinged shock absorber. For a spontaneous stop, four-piston, radial-action brakes with 320 mm discs at the front, supported by a 240 mm disc at the rear, provide the necessary power.

In the end, the price also has some power. It starts at 11,290 euros for the Monster and is thus on par with the Monster 821. In addition to the basic equipment, Ducati also offers a Monster Plus. It stands out from the standard sister with a small cockpit fairing and a pillion seat cover. The extra charge here is 300 euros. Otherwise, as usual, there is a rich repertoire of performance add-on parts with which the monsters can be individualized. It will take a moment before that happens, as the naked bike will not be available at dealers until April 2021.

“Tatort” star Ulrike Folkerts demands – artists have to follow the...

UBS Switzerland boss has high office in prospect at Zurich

Live: Again no victory for Eintracht – 3: 3 at Union