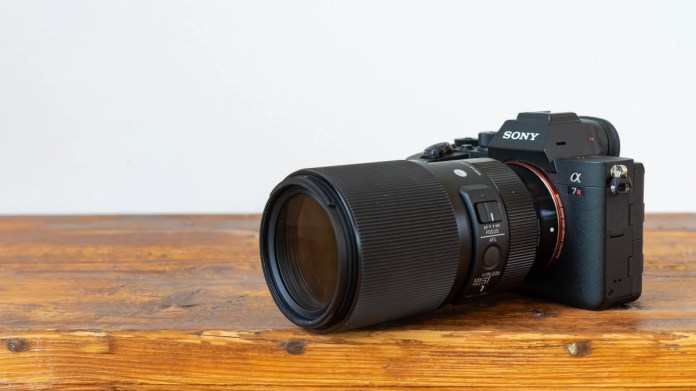 With the 105 mm 1: 2.8 DG DN Macro, Sigma has brought an exciting new fixed focal length onto the market. It is the first macro lens from the manufacturer that is specifically aimed at mirrorless system cameras with full-frame sensors. It is available for Sony’s E-Mount and for the L-Mount cameras from Leica, Panasonic and Sigma themselves. We tested the lens on the Sony Alpha 7R IV (A7R IV) and were also able to use the FE 90 in practice mm F2.8 G OSS, which Sony itself offers in addition to a 50 mm macro in this lens class.

Apart from a small difference in focal length – Sigma uses 105 millimeters, Sony 90 millimeters – the technical data of the competitors are comparable. They enable an image scale of 1: 1 with slightly different close-up areas: The Sigma lens is 29.5 centimeters here, the Sony lens is 28 centimeters. Both open the aperture to a maximum of f / 2.8 and close it to f / 22. Nine aperture blades are supposed to ensure harmonious blurring circles. The filter diameter is 62 millimeters for both models. The constructions are protected against dust and splash water and are comparatively complex, so that weight and dimensions are on the same level. Both macro lenses see themselves as portrait specialists due to their moderate telephoto focal length paired with the large aperture.

The Sony lens has the internal stabilizer ahead of the Sigma competitor. Another significant difference between the original part and the appearance of a third-party manufacturer is noticeable in the price. While the Sony macro still costs around 1000 euros even years after its market launch, the Sigma counterpart with comparable equipment is available for less than 750 euros.

Sigma photographers hardly have to compromise on handling. The processing is typical of the manufacturer of high quality. All controls are tight and the extra wide, fluted electronic focus ring has a pleasant resistance. It reacts very fine and fluid, so that you can work precisely manually. The ring on the Sony lens, on the other hand, reacts a little rougher. The motor of the 105 can be heard clearly not only during automatic focusing (AF), but also during manual work (MF). You have to get used to it first. The Sony lens is a little quieter.

As with the original, photographers can limit the focus range with a slider. They make life easier for the autofocus and shorten the focus times if you only want to take photos in the macro or normal range. Analogous to the Sony lens, the ranges 0.295 to 0.5 meters and 0.5 meters to infinity are possible. Of course, there is also the “Full” option for the entire focus area.

A classic switch changes between manual and autofocus, on the Sony original you pull the focus ring backwards. What you like better is a matter of taste – with the focus ring method, you may change a bit faster. Both lenses also have a focus lock button. With newer cameras like the Sony A7R IV, this button can be assigned other functions relatively freely. The corresponding menu entry can be found in the user key settings. This does not work with older cameras like the A7 II. The last update for this camera was released in 2017, long before the Sigma lens was launched.

Unlike the Sony 90s, the Sigmas 105 has its own aperture ring that can be operated with or without a raster. It has an A-position so that the aperture can also be controlled via the camera.

Knocked unconscious because of a headscarf – Shaimaa T. (17) meets...

Sebastian Vettel stopped in Bahrain qualifying by Mazepin and Sainz

Cinema for one person on the Swedish island

15 degrees – then the weather changes: US snow monsters set...