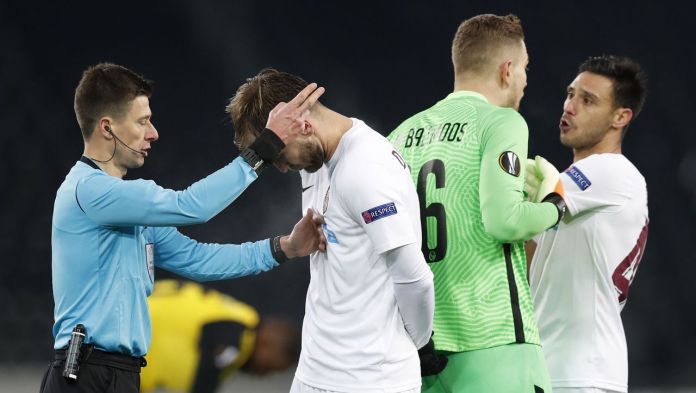 TSG Hoffenheim has crowned its strong preliminary round in the Europa League. The undefeated Bundesliga soccer team won the final game 4-1 (2-0) against KAA Gent. After four wins and a previous draw, Hoffenheim had won the group before the kick-off, and the first entry into the knockout round of a European Cup competition was already perfect.
Maximilian Beier (21st and 49th), Robert Skov (26th) and Andrej Kramaric (64th) scored before Nurio Fortuna (81st) scored for Hoffenheim, who are now looking forward to the draw for the intermediate round on Monday. The competition will continue in February of next year.
In Group B, the Young Boys Bern held CFR Cluj in check for second place in a turbulent stoppage time in which three red cards were awarded 2: 1 (0: 0). In the 90th minute, Cluj goalkeeper Balgradean caught the Bernese Zesiger with his fist on the head. Smooth red. Cluj was still 1-0 up at this point. In the 93rd minute, Bern equalized with a penalty. The penalty taker Tsame committed a rude foul in the 95th minute – red again. A minute later, Bern scored the 2-1 through Gaudino. The dismissal for Djokovic from Cluj for insulting the referee marked the end of the game.
Without Mario Götze, PSV Eindhoven moved into the second round as group winners in the Europa League. The team of coach Roger Schmidt and national player Philipp Max intercepted the Spanish rivals FC Granada on the sixth and final day of the preliminary round in Group E with a 4-0 (1-0) against Omonia Nicosia.

National player Luca Waldschmidt and ex-Dortmund Julian Weigl had less luck with Benfica Lisbon. The Portuguese, who had already qualified for the knockout phase, had no chance in Group D regardless of their 2: 2 (1: 1) at Standard Liège due to the 2: 0 (1: 0) success of the Glasgow Rangers at Lech Posen won the group and had to line up behind the bulkheads.

SSC Napoli celebrated victory in Group F in their first game in their renamed Diego Maradona Stadium. In addition, the Italians scored 1-1 (1-0) against Real Sociedad San Sebastian. The Spaniards can also winter internationally.

Covid-19: Another 333 corona cases and seven dead on the weekend

Corona and Political Failure: How Germany Lost Control of the Virus

dm opens the first of 500 rapid test centers in Germany

German arms exports in the billions in the crisis region of...