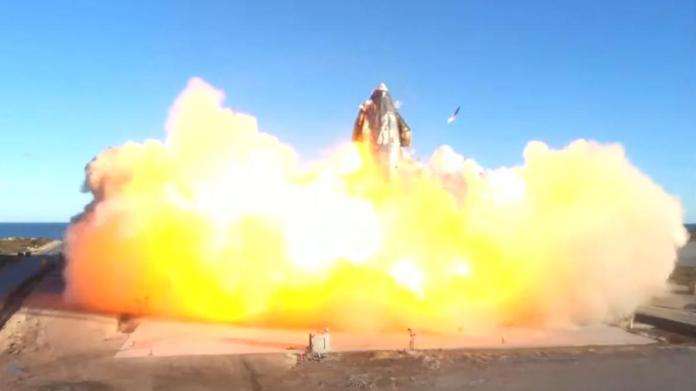 Elon Musk has come one step closer to his goal of manned Mars flights. In the second attempt, the prototype SN8 of its Mars lander Starship took off for a test flight to the planned twelve kilometers altitude. But there were engine problems and after a good six minutes of flight the rocket crashed on the landing site at too great a speed on its return. The prototype with its shiny silver stainless steel case shattered in a huge explosion. Nevertheless, Musks space company SpaceX spoke of an “Awesome Test”, ie a “Super Test”.

As Musk wrote in a short message, the pressure in the fuel tank was too low on landing, which led to a high touchdown speed and the destruction of the missile- “But we have all the data we needed! Congratulations SpaceX team, the devil, yes !! ”tweeted the entrepreneur, who is also at the helm of the electric car company Tesla. Many things would have worked too.

It was an extraordinary test too. The technology entrepreneur and SpaceX founder Elon Musk himself had estimated the chances of success at only around 30 percent. He did not expect an all-round success himself. Too much new was tested for the first time. In Musk’s philosophy, failure in a test phase is not a catastrophe. This is the only way SpaceX can approach what is technically feasible. It’s about nothing less than the development of the largest spaceship of all time, which should also be reusable.

The flight, which now ended with a fireball, was the second attempt. On Tuesday, computers stopped the start 1.3 seconds before take-off due to an engine failure. Now the ignition worked, although the countdown was temporarily interrupted a good two minutes before take-off.

In a test that was unprecedented in space history, the 50-meter-high, unique rocket with folding wings took off at around 4:45 p.m. local time from a SpaceX test site in south Texas into the cloudless sky. Apparently, one of the three newly developed Raptor engines already failed during the ascent.

Nevertheless, the return flight including a complex flight maneuver in the air succeeded. The prototype even headed exactly vertically to the landing site directly next to the launch site, but crashed into a fireball when it touched down. “That wasn’t bad for a first test, they survived most of the flight profile. They may just have to improve a little, “commented US space expert Jonathan McDowell on the attempt.

The test was classified as extremely demanding in advance. For the first time, the three Raptor engines developed by Musk were subjected to a major flight test. In addition, the rocket’s complex control system was tested and fuel was pumped inside the rocket during the flight.

Space enthusiasts have been looking forward to the start for days. In advance, there were four test ignitions of the new Raptor engines developed by Musk and refueling attempts – for the first time with liquid methane and oxygen in a SpaceX rocket. Musk chose methane because this fuel will also be produced on Mars.

The now shattered prototype SN8 is the third flight-tested predecessor model for the future Starship rocket. Starship is planned as the upper stage of a 120-meter giant rocket to conquer the solar system. Musk is gradually working his way up to the flight of the mega-missile. In August 2019, the Starhopper model already flew at a height of 150 meters. Now the first soaring of a large prototype followed.

Even if only smoking rubble remained of the prototype – the next prototype SN9 is already largely assembled. There were repeated setbacks in the development of the Starship rocket when smaller prototypes were destroyed in tests.

The 49-year-old technology entrepreneur Musk had already downplayed the chances of success in the run-up to the flight attempt. The main aim of the flight is to gain experience and learn. SpaceX explained in advance that the success of the flight was not measured by a completely smooth process, but by gaining as much knowledge as possible. This is an attempt, anything can happen, according to industry experts in advance.

Musk sees the Starship rocket as his contribution to saving the world. Only recently, when receiving the Axel Springer Award in Berlin, the technology entrepreneur declared that he wanted to enable mankind to jump into space. As Musk explained in an interview with Springer CEO Mathias Döpfner, he assumes that people will land on Mars for the first time in six years. “If we’re lucky, we can do it in four years,” says the technology entrepreneur who is also at the helm of the electric car company Tesla.

Driven by his Mars flight idea, Musk developed the super rocket. Several times he changed the technical concept. According to the latest draft, his Mars rocket would be 120 meters high and nine meters in diameter. It should be able to lift more than 100 tons into near-Earth orbit or provide space for up to 100 astronauts. Another variant would be hypersonic flights between metropolises on earth, faster than once with the Concorde. The two-stage, reusable rocket with a weight of 5000 tons would be larger than America’s giant rocket Saturn V, which paved the way for the moon landing in 1969. First, the components have to be tested.

With his extremely ambitious space plans, Musk can look back on great successes. A Dragon cargo capsule from his company has just docked fully automatically at the International Space Station for the first time. His Dragon Crew capsule, which brought four people to the ISS, is already docked there. His SpaceX corporation, which was founded only 18 years ago, has become the pacemaker in the industry worldwide. This year alone, 23 SpaceX rockets have already been launched. No other company is currently sending more rockets into space. Musk is the first and so far the only one to build recycling rockets for satellites or manned capsules whose propulsion stages are reusable.

2nd round in the DFB Cup: honest performance is enough for...

“I’m tired of talking about Trump”

After a crash with three dead – police stop Raser at...

Dortmund wants the next ManCity talent ++ Haaland to Barcelona?