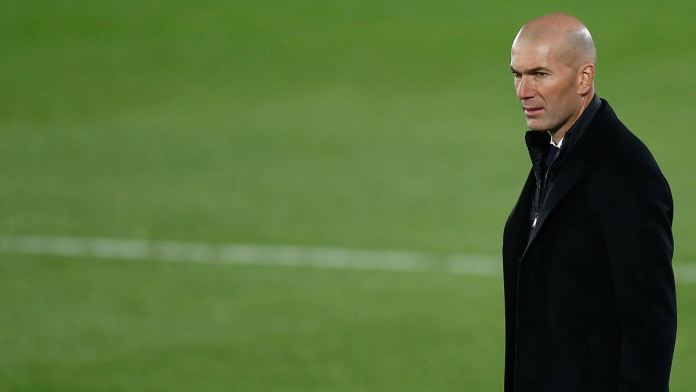 Real Madrid are on the brink of the Champions League. For the first time in the club’s history, Los Blancos are threatened with end in the group stage. This should not remain without consequences for Zinedine Zidane. He is now making an urgent appeal to his team.
The insight of yesteryear may not prevail with Zinedine Zidane these days. Once, that was May 31, 2018. Five days earlier, the coach and his team had won the Champions League. For the third time in a row. An overwhelming European dominance, achieved through a strange 3-1 win against Liverpool. It was the game that made goalkeeper Loris Karius the most tragic figure of the year. The goalkeeper failed fatally against Real Madrid twice. Months later it was revealed that he had suffered a concussion after an elbow strike by the royal defensive edge Sergio Ramos. However, the medical evidence did not add to his reputation.

On May 31, 2018, Zidane finally decided: enough. From now on, the team needs a new impetus to continue to be successful. A new approach is needed, a different methodical work. Zidane stepped back. He surprised the club, he surprised the football world. Los Blancos, who also lost Cristiano Ronaldo, lost their brains and hearts in one fell swoop – and from then on they went through the competitions. Zidane’s successor Julen Lopetegui failed after 14 competitive games (!) – including a cracking 1: 5 debacle in the “Clásico” against FC Barcelona. Santiago Solari fared not much better, nor could he stabilize the tumbling galactics.

It needed a new approach, a different methodical work – so the “best trainer in the world” returned. Just 284 days after his departure, Zinedine Zidane was back in charge. He took over a team between disintegration and open rebellion. And even if he got out of the Corona break last season with royal perfection sprinted to the championship, he was not the savior the Madrilenians saw in him. And these days, a year and a half after his return, all euphoria is gone. The team is tormenting its way through the domestic league, but is fourth in the table, at least ahead of arch-rivals FC Barcelona, ​​which are also in a difficult situation – even if they can still pass by one game behind on points and on goals.

“Do you have to show character”

More threatening the future of Zidane would be the end in the group stage of the Champions League. This has never happened before in Madrid. And it should not be without consequences for the coach. Real absolutely needs a win against Borussia Mönchengladbach to advance safely. But before that there is still a difficult away game at Sevilla FC (Saturday, 4.15 p.m. in the live ticker at ntv.de) at. And this game elevates Zidane to the mentality test for his team. “In difficult times you have to show character,” said Zidane: “I have the strength to change the situation and I will give everything for it – just like the players.”

Zidane wants to fight, the insight that someone else could do better, he doesn’t. After the 0-2 disgrace this week in the premier class at Shakhtar Donetsk, he ruled out an early departure. I won’t resign, not at all, “he muttered into a TV microphone after the game,” we have to get through this situation. “There have always been” sensitive moments “at this club.” When there is a bad phase, there is no choice but to help each other. ”

In the Spanish media, however, there is already heavy speculation that Zidane himself might not be enough to advance in the Champions League. And after the game against Mönchengladbach, the next game of fate awaits the ailing coach with the Derby Madrileno against Atlético. It was “the worst moments” for Zidane in Madrid, writes the sports newspaper “AS”. This ease with which he won the three Champions League titles as a real coach? Long gone.

When analyzing the crisis, however, the club’s personnel planning is also in focus: Real has still not been able to compensate for the loss of Ronaldo. Eden Hazard (he came from Chelsea FC before last season), who was supposed to take on the role of the central figure, has not yet succeeded in this. The Belgian has recorded almost as many injuries (nine) as goals and assists (ten) in Madrid in a year and a half. In addition, key positions have not been filled for years. Successors for Toni Kroos, Luka Modric or Sergio Ramos were not established. Instead of fresh greed, there is a lot of satiety in the (still luxurious) squad. According to “Marca”, parts of it should have lost trust in the coach.

Its potential successors are already being traded. According to “Marca”, the favorite is former Tottenham coach Mauricio Pochettino. Real legend Raul should also be among the candidates. But Zidane doesn’t want to think about these things yet. He does not share the insight that a new address is needed.

London theaters have to close again

FC Bayern confirms OP: Tolisso could be absent for up to...

Trump could use military against Biden victory

Corona dispute: This is why PCR test manufacturers are demanding more...