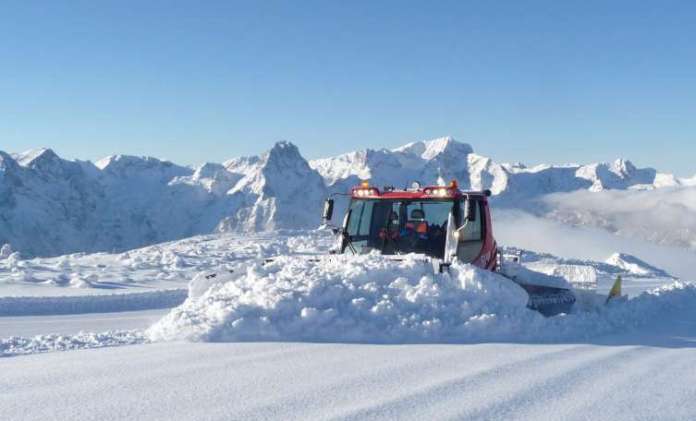 HINTERSTODER / SPITAL AM PYHRN. The skis and snowboards are waxed, the shoes are cleaned and the weather forecast for Christmas is constantly in view: On December 24th, the ski areas will start a winter season characterized by Covid-19 safety concepts.

In many places, the slopes of the ski areas would already be snowed enough for operation, but the gondolas, chair lifts and drag lifts will only be able to carry winter sports enthusiasts to icy heights from December 24th. “We assume that this winter mainly day visitors and short vacationers from Upper Austria, Lower Austria and Vienna will come to us. In the overnight statistics, however, they will not be able to compensate for the lack of holidaymakers from abroad, ”reports Marie-Louise Schnurpfeil, managing director of the Pyhrn Priel tourism association. In addition to the late start of the season, the corona pandemic also affects preparations and rules of conduct.

Helmut Holzinger, CEO of the Hinterstoder-Wurzeralm Bergbahnen, knows how much work there is behind such a safety concept: “We have adopted our safety concept from the summer and adapted it to the new regulations. The whole situation is an extraordinary challenge. “The adapted security concept primarily affects the queuing areas, waiting and operating times:” If the ski areas are overloaded, the ski areas must be closed. It would help us in this regard if the tickets were ordered online, ”says the HiWu board. The operating times of the ski areas are also to be brought forward: Hinterstoder should open at 8 a.m., the Wurzeralm probably at 8:30 a.m.

Always with you: baby elephant

Mouth and nose protection must be worn in the ski area in Hinterstoder and in Spital am Pyhrn in the ski bus as well as in the entire ticket office and cable car area. In addition, the MNS also applies to all vehicles such as cabins, lift chairs and drag lifts. Children up to the age of six do not have to wear an MNS. “The mask requirement is also checked,” emphasizes Holzinger. However, the waiting areas are organized in such a way that groups of people standing close together are avoided as far as possible. “The queuing areas are therefore organized with a control system like in the airport,” says Holzinger.

With the opening of the catering establishments on January 7th, mountain catering will also start again. The “online restaurants” on the Bärenhütte in Hinterstoder and in the mountain restaurant on the Wurzeralm are new: the food is ordered online via QR code, paid for and brought to the table by employees. This is to avoid queues at the cash registers.

The plan is to open the ascent track for piste skiers on the Wurzeralm as early as possible, i.e. before Christmas. The Höss will continue to be closed to piste skiers, as “the appropriate safety and quality cannot be ensured”, says Holzinger and emphasizes: “At the moment we still lack natural snow. I hope he’ll come. “Snow also wishes Schnurpfeil and insists on” a season that in retrospect you will say: “You couldn’t have done it better and more successfully in such an exceptional winter!”

The SWR crime scene: This is our house “

Weather in Germany: In which places the chances of a white...

Did DaBaby dish out YouTuber JoJo Siwa in a rap? When it comes to the hero bonus, the employees of the...