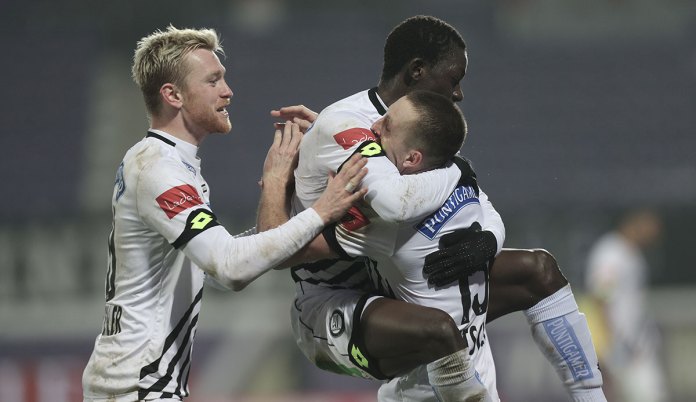 Christian Ilzer celebrated another sense of achievement with Sturm Graz on his return to Vienna. The Styrians clearly prevailed at Austria on Saturday 4-0 (1-0) and after their third league win in a row they pushed past Rapid to third place in the table. As eighth, Austria runs the risk of losing sight of the top six completely.

David Nemeth (40th) first scored for Sturm from a corner, Otar Kiteishvili (70th, 74th) made the decision with his brace in the second half. Austria’s Dominik Fitz had seen the red card (69th) shortly before after a foul. Bekim Balaj (94th) got the final score. The Viennese have already been waiting six rounds for a win. The Stöger team only got ten points after ten laps.

Ilzer could look forward to a successful afternoon. Sturm’s coach only made one change compared to the last game with the addition of Kiteishvili. At Austria the sick Manprit Sarkaria was missing, Alexander Grünwald sat on the bench like Christoph Monschein or the recovered Michael Madl. Apart from Stephan Zwierschitz, no Austrian was older than 23 in attack and midfield.

Pichler also introduced the first chance of the game in the 12th minute. The attacker passed Nemeth, but Patrick Wimmer headed his cross too centrally on the storm housing. Jörg Siebenhandl parried. The streak of success was not yet visible at Sturm. A game at eye level developed.

A header from Jon Gorenc-Stankovic (24th) was extremely dangerous because Austria keeper Patrick Pentz slipped. On the other side, Gregory Wüthrich blocked a shot from Aleksandar Jukic (33.). A rehearsed corner version finally brought Sturm into the front. Kevin Friesenbichler extended to central defender Nemeth, who converted from close range. Friesenbichler’s attempt on the Kreuzeck was then parried by Pentz.

Immediately after the restart, Ivan Ljubic seemed to have beaten the goalkeeper again. In the case of Jakob Jantscher, however, an offside position was located. This was not clearly visible in the TV pictures. The Grazers, who had only conceded five goals after the 10th round, relied on their compactness and left Austria little room to develop.

The Viennese, where Monschein came into play after just under an hour, invested a lot. However, Fitz should weaken his team. The offensive man slipped Jantscher from behind in the legs and saw smooth red. Less than a minute later Jantscher served Kiteishvili, who brought about the preliminary decision. The Georgian scored again shortly afterwards against a disordered Austria defense. Now completely insecure Violette ran into a sensitive defeat, at the latest after the substitute Balaj was allowed to cheer.

The table before the games on Sunday

Coincidence? The corona cases are increasing at FC Bayern “Spectacular newcomer”: that’s how easy it is for RB Leipzig to...