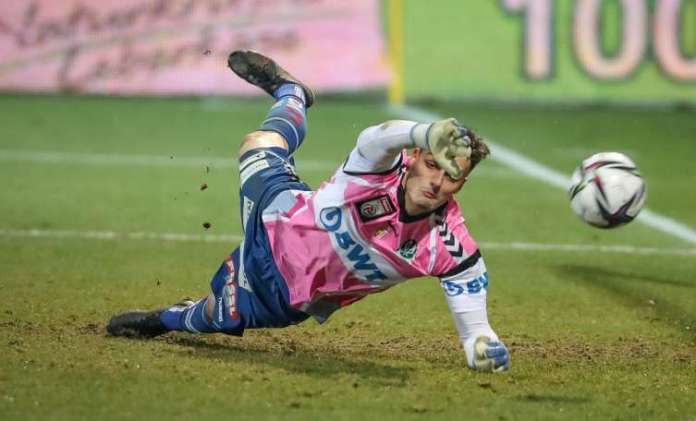 REED. Against the bottom of the table, Cashpoint SCR Altach, three points were actually planned for SV Guntamatic Ried – but the game went completely different and ended with a 1: 4 home defeat.

As early as the 11th minute, the SVR was outnumbered: Markus Lackner flew off the pitch after two unnecessary fouls within just under three minutes.

For a long time, it was hardly noticeable that the Vorarlbergers played more with a man. Altach didn’t get his first chance until the 29th minute – Ante Bajic saved on the line.

In the 42nd minute, Manfred Fischer gave the guests the lead with a penalty after a foul by Constantin Reiner.

Ante Bajic equalized 1-1 just three minutes later, completing a strong solo over half the pitch with a well-placed shot into the far corner.

Daniliuc kept the SVR in the game

Only after the break were the guests slowly able to make better use of the numerical superiority. Ried goalkeeper Daniel Daniliuc, who represented the injured Samuel Sahin-Radlinger, was able to thwart the first chances – among other things with a spectacular save against substitute Obasi. He was powerless against a deflected shot by Thurnwald in the 77th minute. This hit to 1: 2 was the preliminary decision.

When SVR coach Gerald Baumgartner reacted and replaced three players in the 80th minute, Altach used the moment of unsorted defenses and the ex-Rieder Schreiner scored the 3: 1 (82nd). Just four minutes later, Thurnwald walked through the Ried defense with practically no obstacles, and Schreiner turned his template to 4: 1 (86th).

Baumgartner quarreled somewhat with some of the decisions made by referee Alexander Harkam: “With the yellow-red card, you could have exercised a bit of tact. But something like that shouldn’t happen to an experienced player like Lackner. Before the 2: 1 you could have whistled a foul on Grüll. The leadership gave the Altachers confidence and they played it home well. In the second half we were close to the lead for a long time, and we processed the exclusion well over long stretches. The fight for survival in the league will be tough, but we knew that beforehand. ”

Altach coach Alex Pastoor was of course pleased, but also saw weaknesses in his team: “In terms of order, we did a lot right. With the ball, we showed at times that we lacked confidence, but there were also a few good actions. The win was great for us and of course it has to do with the yellow-red card. Despite the 4-1 win, we didn’t do everything right. With one more man we should have played more dominantly, but that only worked out at the end. ”

The last game before the Christmas break will be played on Sunday (December 20th, 2.30 p.m.) in Wattens. Baumgartner denies that the pressure on him had increased after the 1: 4: “We will address the mistakes and try to score points in Tyrol. The pressure has not increased, we always want to write. ”

Hecking on Gladbach’s Rose: “Eberl did not assume that the path...

WHO reports 7 percent increase in Covid

AfD voters as drivers of the pandemic?