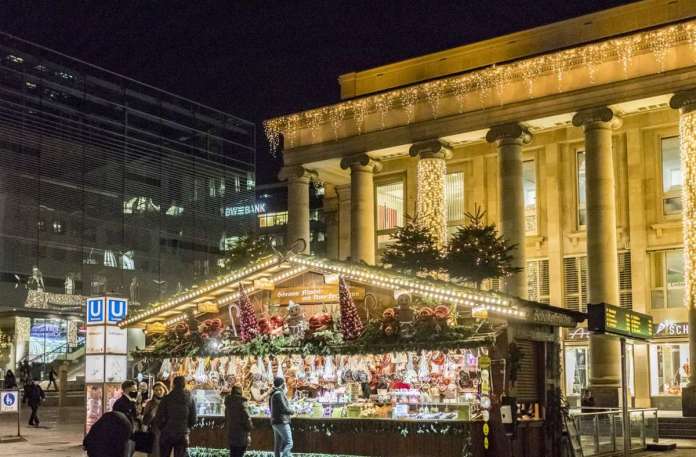 Stuttgart – Mark Roschmann, President of the Southwest Showmen Association, doesn’t want much more than “equal rights for all”. The fact that mulled wine and bratwurst are forbidden on the Advent Magic, as the alternative with 33 stalls for the canceled Stuttgart Christmas market is called, while the surrounding restaurateurs offer these sales hits in abundance, is a contradiction, which is a contradiction in terms of increasing annoyance among those who come and visit the city worry. This problem also arose in Karlsruhe, which is why the city administration there subsequently approved further stalls that are now allowed to sell food and hot drinks to go because of the equal treatment – with the condition, of course, that consumers have to search the distance, not on Be allowed to stand still.

The showmen demand that Stuttgart City Hall should follow this example immediately. That is why President Mark Roschmann wrote to Mayor Fritz Kuhn less than a week ago. “He just doesn’t answer us,” he complains. It could not be that the serving of mulled wine in front of the art museum or in front of the old chancellery is considered Corona-compliant, while it violates the pandemic regulation a few steps further. “That is a big annoyance”, complains Roschmann, “also the city’s zero reaction”.

The first balance of the Advent Magic is therefore “mixed”. The 33 feeders who come across the city to the train would be happy that they didn’t have to stay at home and could at least make a small turnover. But many showmen are denied what the restaurateurs are allowed to do. There was a lot going on in the city center on Saturday and Black Friday last week, reports showman Daniel Kromer, who sells Nepal woolen goods on lower Königstrasse. “During the week we notice that there are no tourists, especially from Switzerland,” he says, “we usually only generate little turnover.”

Many showmen close earlier than they have to

The reactions of his customers are very nice, says the specialist for thick, warm sweaters: “Many tell us how happy they are that there are at least a few stands that create a Christmas atmosphere in the city center.” the Königstrasse trees and the highlights on the Schlossplatz would be very well received, explains Kromer.

Since there is little activity on Königstraße in the evening after 8 p.m. when the shops close, most of the people who deliver the Advent Magic call it a day – earlier than they have to. The sale is approved until 9 p.m.

The replacement Christmas market is closed on Sundays and public holidays – but it goes until January 9th. Sunday in particular was a busy day for the showmen. Compensation could be the extension beyond Christmas and New Year’s Eve.

Selling in the stalls becomes a matter for the boss

What stands out: Most of the operators of the Advent Magic have not hired any staff this time, but make sales a top priority. At best, family members or friends help out if the stall owner doesn’t have time.

When it comes to the sale of mulled wine, the city says, nothing can be changed for legal reasons alone. Even if you subsequently approve three or four more stalls for seasonal hot drinks – there would have to be enough space for this between the train station and Tübinger Straße – the operators would need “a separate license” for serving alcohol, the press office said. Appropriate permission is only possible during an event. While the normal Christmas market is considered an event, this is probably not the case with Advent magic. In addition, the alcohol license can “currently not be granted for infectious reasons”, explains the city.

Meanwhile, the number of Christmas decorated places where you can get sausages, waffles, punch and mulled wine is growing. Breuninger is now also there, as the company announced on Thursday. The Sansibar and Eduard’s in the Dorotheenquartier as well as the Karlspassage have started a “Christmas market to go”. Among other things, there are grilled sausages with sauerkraut, winter hot drinks with or without alcohol and vegetable stew, Monday to Thursday from 11.30 a.m. to 7 p.m., Friday and Saturday from 10 a.m. to 9 p.m.

You can’t stay seated. Quite a few linger in the nearby “Winter Garden”, which is provided by several landscape gardeners in the Dorotheenquartier. The installations are intended to create a “Christmas atmosphere between thousands of Christmas rose blossoms and festive lighting”, as district manager Kemal Düzel emphasizes. “We are bringing nature into the city,” he says, “despite Corona, there were pandemic-compliant campaigns at our Summer Garden”.

Bea Fiedler in the jungle show: First playmate, then welfare

Judgment in the case of Nathalie M .: Life sentence for...

Chelsea messes up again in the Premier League Salzburg: three talents are coming, is Star going to Arsenal? ...

Zoff at 86 cents: Does the increase in the license fee...

The last Thursday in chronology!