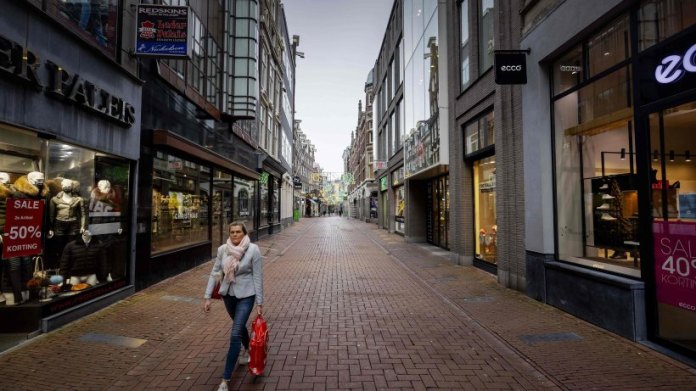 The hague.
The Netherlands have imposed the toughest lockdown to date for their country. According to the newspaper “de Volkskrant”, the lockdown is self-inflicted.

Given dramatically increasing numbers of infections the Netherlands have the toughest lockdown yet imposed for their country. The strict measures will come into effect from midnight and should last until January 19, announced Prime Minister Mark Rutte in a TV address on Monday evening. For the first time since the outbreak of the corona pandemic, shops – except for daily needs – have to close. The Dutch newspaper “de Volkskrant” wrote on Tuesday: “We brought about the lockdown ourselves”.

The country is also reacting to the tough shutdown in neighboring Germany.

Three guests are allowed in the Netherlands at Christmas

From Monday night must also Cinemas, theaters and museums are closing such as Hairdressers, gyms and swimming pools. Citizens are only allowed to meet two other people per day. There can be three guests at Christmas. From Wednesday, the Schools and daycare centers closed. We strongly advise against traveling abroad until mid-March.

Rutte emphasized that it was an extremely tough message “just before Christmas”. “But we have no choice,” emphasized the right-wing liberal prime minister. The situation is very serious, hospitals can hardly withstand the pressure. “But we will make it,” he affirmed.

The number of new infections has risen sharply since mid-November. Last were rund 8500 cases in 24 hours been reported. That was less than the day before with around 10,000 reports. However, the numbers on Mondays are in most cases significantly lower than on other days. In Germany, with around five times as many inhabitants, around 16,000 new infections were registered on Monday.

It was only the premier’s second TV address. In the background, chants and whistles from a few dozen demonstrators could be heard in front of the prime minister’s headquarters. A partial lockdown has been in effect in the Netherlands since around mid-October. Private contacts were restricted and restaurants were closed. However, this did not lead to a permanent decrease in infections.

Write about the imposed lockdown the Dutch newspaper “de Volkskrant” on Tuesday: “The Dutchman’s stubbornness is cited by himself as the cause of the increase in corona infections. In other words, we locked down ourselves by giving in to the lure of Black Friday and other shopping festivals en masse.

Countries governed by totalitarianism seem to be better equipped to effectively combat the corona pandemic, although there too it has yet to be shown how sustainable the successes are. In Europe, governments are tentatively groping and (sometimes) stumbling in search of ways to contain the spread of the virus while maintaining as many freedoms as possible. This policy may not always be understandable and effective, but it fits our society. “(Dpa)