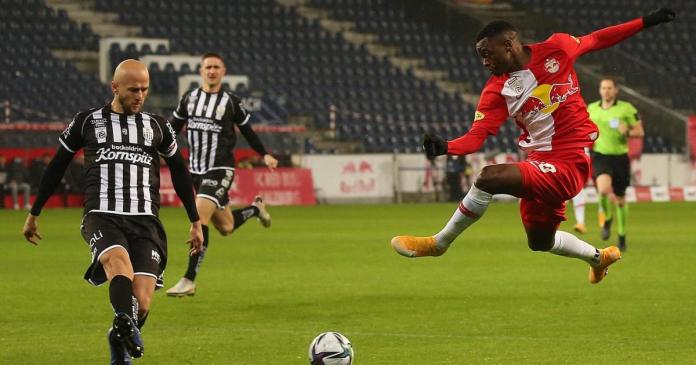 Compared to the 2-0 draw against Atletico Madrid on Wednesday, there was only one change: Camara, who was suspended in the Champions League, returned to the starting line-up. Koita had to take a seat on the substitutes’ bench.

At LASK there were three changes compared to the 3: 1 at Ludogorez Razgrad in the Europa League: The Trauner, Michorl and Gruber, who were not present in the meaningless group game on Thursday, returned to the team.

In February the duel between the two currently best teams in Austria was still a firework of chances of the most attractive kind. That wasn’t the hit on Sunday. Both teams, who play a similar style, neutralized each other over long stretches.

Salzburg got off to a better start without being really dangerous. A scene in the 10th minute was hairy: Daka ran towards the LASK goal, spitting the ball away just before the edge of the penalty area before it was hit by Andrade. Referee Lechner, who was a good 30 meters away, decided to continue playing. If he had called a foul, he should have expelled the LASK defender.

After 20 minutes, Linz got the game under control. Salzburg was extremely low, could hardly free themselves because the ball was lost after two stops at the latest. The 0: 1 was only a matter of time, in the 28th minute it fell: after a fantastic cross Eggestein set a perfect header. The German had only got escort from the Salzburg central defense.

It took Salzburg a long time to recover from the shock. Only after the break did they find their way back into the game – also thanks to the quick 1-1 draw. Junuzovic had wonderfully cleared Szoboszlai, whose perfect Stangl pass Daka easily used (54th).

LASK began to make unfamiliar mistakes: the otherwise safe keeper Schlager played the ball right in front of Berisha’s feet. In a fit of genius, the German circled it from a great distance to the 2-1 lead in the long corner (62nd).

In the final phase, Linz risked everything, but failed several times to keeper Stankovic and received the third goal after a Mwepu solo run. The 3-2 away win in February remains the only LASK success in the past ten competitive games against the series champions.

Coronavirus: This is why the Corona mutation is so dangerous

Coronavirus pandemic: ++ All students should go to school in March...

Corona vaccination: trouble with seniors and problems with delivery