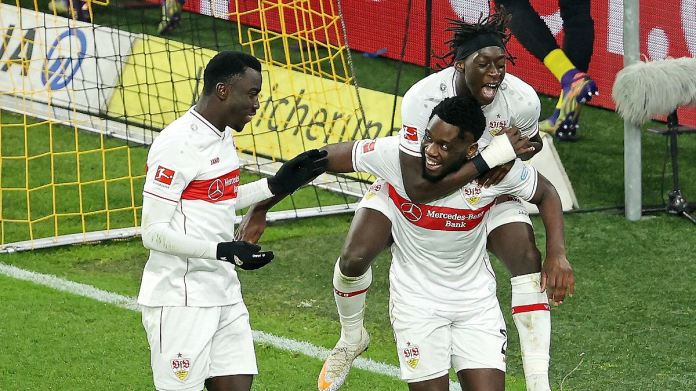 Young, wild – and successful? Promoted VfB Stuttgart is doing well in the early stages of this Bundesliga season. The Swabians annoy FC Bayern and outclass Borussia Dortmund. Three executives, a veteran and a bunch of talents are decisive for him.
When fans of VfB Stuttgart really want to bathe in nostalgia, they conjure up one of the legendary evenings from 2003 or 2007, when the team from Bad Cannstatt played in the premier class and competed for titles. Now the 2020 team is preparing to usher in a new generation of the “young and wild” and mixes up the league with good football.

24 goals, full throttle offensive and seventh place in the Bundesliga table – Stuttgart has been the surprise of the 20/21 season so far. The success of the new VfB has many faces and can be summed up under one catchphrase: courage. Coach Pellegrino Matarazzo repeats his approach like a mantra: “We want to play boldly.” That can end in a 2: 3 bankruptcy against Freiburg, like at the beginning of the league – or in a 5: 1 dismantling of the runner-up Borussia Dortmund. So far, VfB has mostly been rewarded for its courageous style of play with a lot of pressing.

Youngsters like Silas Wamangituka (21) and Tanguy Coulibaly (19) really flourish under the studied mathematician Matarazzo. The statistics show how young and wild VfB is: The 43-year-old coach sent the second youngest team in Stuttgart’s Bundesliga history onto the pitch against Dortmund. In the current season, VfB is on average the youngest team in the league at 23.8 years.

The showpiece of the team is the offensive, currently the second best in the league. Matarazzo goes into raptures himself. “The potential is limitless with Silas and many other players,” said the coach. “We are taking very good steps at a good speed. We have an enormous level of training and commitment. That is the reason why we are moving so quickly.”

It was a long time ago that “young and wild” people were raved about in the south. The team under coach Felix Magath is the first generation, which rushed into the premier class in 2003 with young stars like Timo Hildebrand, Philipp Lahm, Kevin Kuranyi and Alexander Hleb. Four years later a new formation of Junge Wilder rose up, led by Mario Gomez, Sami Khedira and Serdar Tasci. After a short interim high in 2009, the deep crash followed, twice even into second class. There was still plenty of talent in the youth, but they left the club, like Timo Werner shortly after their professional debut or like Serge Gnabry and Joshua Kimmich even as youth players.

Unlike in the 2000s, this time it is not the own offspring that is responsible for the upswing, but above all the excellent scouting. VfB’s high cannot be explained without Sven Mislintat. Once baptized in Dortmund as “Diamond Eye”, he came to Stuttgart in April 2019 after his stint at Arsenal FC. The sporting director’s work went anything but smoothly: A year ago he dismissed coach Tim Walter, who was third in the second division, because the chances of promotion seemed to be diminishing, and relied on Matarazzo.

Hardly any time to “frat over”

There was always support from his boss – Thomas Hitzlsperger, who was promoted from the director of the youth training center to chairman of the board in a very short time. Hitzlsperger symbolizes the new style and team thinking at VfB. He installed Mislintat as a strong man next to him and trusted his squad planning. Wamangituka brought VfB from the French second division (Paris FC) to the Neckar, and Coulibaly from the U19 from Paris St. Germain. The strong running Wataru Endo came from Belgium, from VV St. Truiden. Wamangituka represents VfB’s fast offensive game like no other, and what often comes across as lanky often means hard work on the defensive for the opponent.

In addition to Daniel Didavi (30), Gonzalo Castro (33) is primarily responsible for the experience with so much youth. The veteran has seen a lot in his career, played in Leverkusen, Dortmund, for the DFB team. He is currently experiencing his third spring in Stuttgart. However, the footsteps of the previous “young and wild” generations are big: their predecessors ended up in the Champions League or sensationally won the championship title. The 3.0 edition is still quite a long way from that, so shortly after the ascent.

This text was first published by the colleagues at rtl.de.

For the Swabians, who traditionally have a penchant for “fratdling” (High German: moaning, moaning), there are actually only two tiny reasons for acute fraternity. On the one hand, that the success cannot be celebrated with the fans in the stadium and, on the other hand, that – perhaps because the fans are missing – there has not yet been a home win. But at least the latter can be against 1. FC Union (8.30 p.m. in the ntv.de live ticker) already change.

Criticism of speed and procurement: is Germany really in vaccination chaos?

Pennsylvania also confirms the result of the US presidential election

90 million people have slipped into extreme poverty since Corona

Journey to a glacier grotto in the Swiss Valais

Katharina Liensberger: With a thrill in the ball final – winter...

Horror at night: the house burns down completely, the couple is...