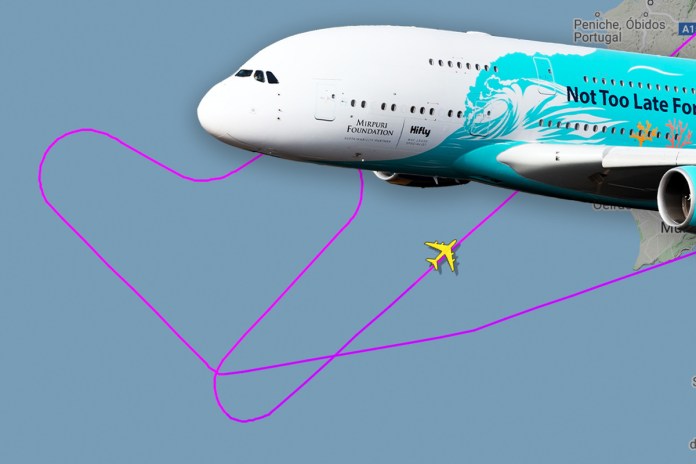 A Hi Fly Airbus A380 flew a heart in the sky over Portugal to give strength and hope in the pandemic. The aircraft is decommissioned.

It was Thursday morning when the Portuguese airline Hi Fly sent its A380 jumbo jet on one last trip.

From the base in Beja we went to Toulouse in France, about two hours away. The world’s largest passenger aircraft will now be parked there until a new operator can be found.

After a while, the machine may be cannibalized and used as a spare parts donor. In the past few years, aircraft of this type have increasingly fallen into disrepute among operators because they are no longer profitable. Only rarely were all over 800 seats booked on one route.

To say goodbye, the “Hi Fly” bosses sent their special piece of jewelery in “Save the coral reefs” paint not directly into the desert.

The pilots were allowed to fly a declaration of love to airplane fans and the Portuguese population.

Over the Atlantic coast off Lisbon they made an extra lap in the shape of a heart – a detour that resulted in more than an hour of additional flight time. With this the airline speaks to its compatriots for the difficult time in the Corona-Pandemie and want to give hope.

The last passenger flights of the “Hi Fly” A380 began in February of this year. Several evacuation flights to Europe were carried out from Wuhan.

Since May, the jumbo jet has only been flying various types of cargo, such as face masks, protective suits and disinfectants from Asia to various European countries.

However, it was not until June that almost all the seats were removed from the huge aircraft. From then on, the airline was able to transport even more goods.

The last long-haul flight of the brightly painted Airbus was on December 14 from Seoul in South Korea Hamburg.

Protection against corona infection: what are the benefits of the FFP2...

Woman and child shot in Mistelbach

William has a secret love nest for dating Kate