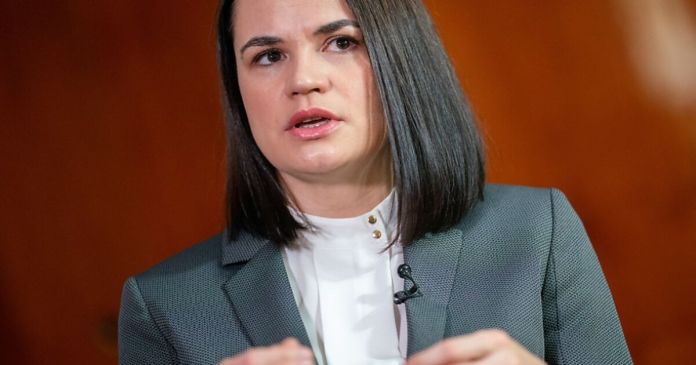 She also called for tougher sanctions against Lukashenko. “The punitive measures look ridiculous when we see how many people have been arrested so far. More than 30,000 have been since August.” There are many words of support. “But we need action.”

In protests against Lukashenko last Sunday, according to the Interior Ministry in Minsk, 271 people were put in prisons for taking part in unauthorized rallies.

Thousands of people took part, fewer than in autumn. “Even if the protests on the street will now decrease in winter, we will survive it and come back even stronger in the spring when the weather gets better,” said Tichanovskaya. “We can win, I believe.” She wanted to meet Germany’s President Frank-Walter Steinmeier on Monday afternoon.

Belarus has been in a serious domestic political crisis since the controversial presidential election on August 9th. After 26 years in power, Lukashenko had himself confirmed for a sixth term with 80.1 percent of the vote. The EU no longer recognizes him as president. For the opposition, Tichanovskaya is the real winner. After the vote, she fled to the EU country Lithuania.

On Wednesday Tichanovskaya will accept the European Parliament’s renowned Sakharov Human Rights Prize. This year the award goes to the opposition in Belarus.

The former foreign language teacher Tichanowskaja is considered to be the leader of the democracy movement. The civil rights activist was surprisingly allowed to run for the presidential election after the ruler Alexander Lukashenko had her husband locked up in prison.

Schleswig-Holstein does not want to open schools for the time being,...

The bet-at-home basketball super league on Sky: The duel between BC...

Biathlon in Oberhof today in the live ticker: The mass starts...