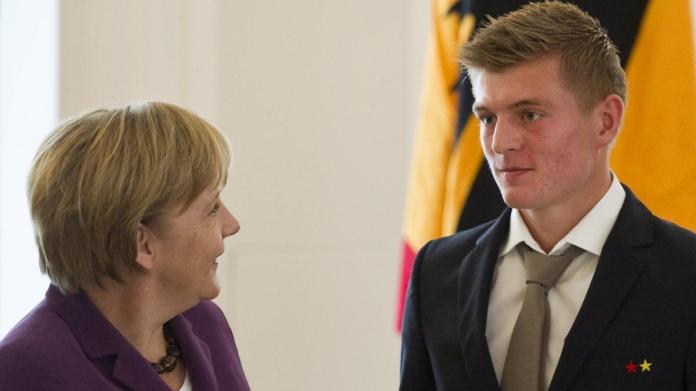 “Ms. Merkel never has any strategic issues in mind”

Toni Kroos gave an eulogy for Angela Merkel’s political course. His appreciation for their decisions is great. The Federal Chancellor, Kroos believes, meets her with very special intentions.

Toni Kroos went into raptures. For him, said the Real Madrid midfield star, Chancellor Angela Merkel (CDU) is “a very impressive” woman. “With her, I always have the feeling that she makes every decision with a good heart and that she never has any strategic issues in mind. Rather, she hits it with her whole heart – well meant as a good person – I think that nowadays, if you look left and right, that is extremely valuable, ”said the 30-year-old from Mecklenburg in an interview with Johannes B. Kerner for the MagentaTV format “best cast” was performed.

In Germany you always have the problem “that we are looking for the mistakes – but if you hear a little beyond the borders – I notice it myself, I’m in Spain …, abroad people speak positively about this woman . I think we could learn a really big slice of it in Germany, ”he said.

Meanwhile, Kroos was part of the unfortunate Real team on Tuesday evening, which embarrassed itself with 0: 2 (0: 0) at Shakhtar Donetsk. The team is threatened with the end of the Champions League group stage for the first time in club history. The Madrilenians slipped to third place in the table. Even in the first leg, the Ukrainians, who had suffered two clear bankruptcies against front runner Borussia Mönchengladbach, celebrated a surprising victory in Madrid. With previously 24 participations in the premier class, Real had always made it to at least the second round. In the final group game on December 9th, Zinedine Zidane’s team will face Gladbach.

New trailer with the Joker

Fight for Lauber’s successor – will Switzerland soon have a federal...