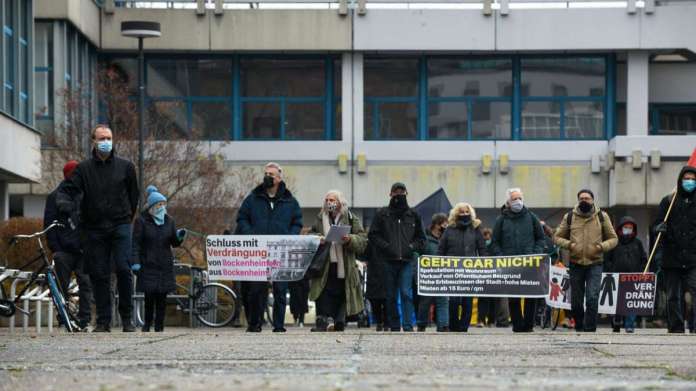 In Bockenheim, attention is not only drawn to unused properties

With police escort, they walk through their quarters on Saturday afternoon. Around 40 participants took part in the second “critical city walk”, to which several Bockenheimer initiatives invited. All wear mouth and nose protection and keep their distance from one another. Due to the corona, the city walk had to be registered as a demonstration, hence the police presence, reports Anette Mönich from the Future Bockenheim initiative. The organizers have also brought some banners and a loudspeaker in the handcart.

At around ten stations, such as the old bakery on Hülya-Platz, the Aktvist: Inside show where there is vacancy, how affordable living space in the district has been destroyed and owner-managed businesses displaced by rent increases. As an example, Mönich cites the artistry and play accessories shop “Pappnase”, which was located on the Vorderer Leipziger Strasse for decades before it had to close two years ago.

Diagonally opposite, next to the Café Extrablatt, at the Bockenheimer Warte, Niklas Lehrke is worried about the student dormitory, in which 300 students currently live. “At the moment we have to assume that the dormitory places cannot be obtained,” says the housing officer of the Asta (General Student Committee). The municipal housing company ABG will take over the building on the former campus from the university, “but at significantly higher costs,” as Lehrke fears.

A few meters further on the former university site, “Labsaal Goodbye” was written on a wall. Next to it is Gabi Hanka, from the “Seebrücke” initiative, and reports: “The lab room has been used repeatedly as collective accommodation for refugees since 2015”. For some time it has been standing empty. “We asked the city’s social welfare committee to open it to homeless people,” says Hanka. But there was only referred to the B-level of the main guard as an overnight accommodation.

Behind the house, at Mertonstrasse 30, there are white tents. Where the European Academy of Labor used to be housed, volunteers founded the “Ada-Kantine” in the spring to offer homeless people in particular a warm meal and space for exchange on weekends.

At the “Open House of Cultures”, Tim Schuster, from the initiative of the same name, refers to the millions of dollars that the university campus should meanwhile be worth. An exact amount has never been published. “The property has always been public,” says Schuster. The building in which the self-organized cultural center is located was built after the Second World War to strengthen democracy from a budget of the US High Commission.

The retail space of house number 3 on the first floor is deteriorating in Jordanstrasse. Graffiti and wildly glued posters obscure the view through the shop window. Two corners further is the next stop at Adalbert-Straße 11. “That was a very combative house number,” says Mönich. But despite the committed house community, the involvement of the local council and municipal committees, seven out of eight tenants were ultimately forced to move out. “The displacement process can only be stopped if there is a stronger socialization and the city buys houses,” says Mönich. But it is important to remain persistent, especially with a view to the local elections coming up in spring.

What is being eased in Lower Saxony? Because expresses itself...

Girls are said to have been sexually abused for 40 minutes...

The race now in the live ticker Rewe and Spar are giving away FFP2 masks

The Astrazeneca files: How the dispute between the EU, Great Britain...