In western Pennsylvania, a 63-year-old man was hit by an evacuation vehicle with a snow blower on Wednesday and succumbed to the injuries. The snowfall had started in some coastal states late Wednesday afternoon (local time). A day later, meteorologists measured 50 centimeters of fresh snow for parts of Pennsylvania.

In the metropolis of New York, 16 centimeters of fresh snow was measured in Central Park on Thursday night until 1 a.m. with continued snowfall – more than the twelve centimeters that had fallen there in the entire winter of the previous year. On Thursday, the storm moved further to the northeast, most of the streets around the metropolis were cleared in light, persistent snowfall. For the New England states further north, around 35 centimeters were announced.

The website Poweroutage.us reported power outages in around 70,000 households in the northeastern United States on Thursday morning – a rather low figure compared to similar weather conditions in the past. School authorities had announced that the usually proclaimed free snow days will not be available this year due to the virtual lessons in the corona pandemic.

A heavy snow storm also raged in eastern Japan and stuck around 1,100 cars. Dozens of soldiers arrived on Thursday on the snow-covered Kan-Etsu expressway northwest of the capital Tokyo to supply the people who had been stuck in the vehicles for hours with food, gasoline and blankets, the Kyodo news agency reported. For their part, motorway workers tried to shovel the cars free. Those affected threatened to have to spend another night in their car. Prime Minister Yoshihide Suga said the government’s priority is taking care of their health.

A cold spell hit Japan this week and brought much snow to large parts of the country. Due to the fresh snow, the snow depth in Yuzawa, where the Kan-etsu expressway runs along, rose to 181 centimeters, according to Kyodo.

Also on the Joshin-Etsu Expressway, which, like the Kan-Etsu expressway, is on Japan’s main island of Honshu, around 200 vehicles were temporarily stuck in the snow. The Japanese Meteorological Agency warned of avalanches and other traffic obstructions in eastern and central Japan and in the coastal areas of the Sea of ​​Japan. Further snowfall was predicted for these regions.

Gladbach – FC Bayern on TV and livestream: This is how...

Screenwriters support colleague in dispute over “no ears” 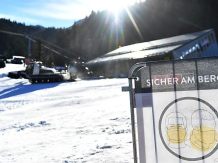 Less going on on the slopes than on Christmas days –...