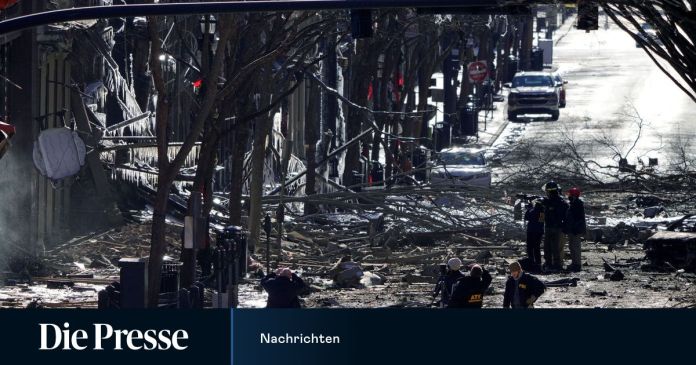 The residents had been warned of the detonation, which left massive damage in the city center. The motive behind the act is unclear.

The Nashville bomber is dead: The perpetrator was killed in the explosion of his trailer on Christmas Day. The motive behind the act is still unclear, said representatives of the public prosecutor and the FBI Federal Police on Sunday (local time). Nashville police chief John Drake said the man acted alone based on what is known.

The detonation, which was preceded by a warning to local residents, caused massive property damage in the city center, and three people were injured. The perpetrator was identified on the basis of DNA samples, said the local FBI chief Douglas Korneski. Investigators had found human tissue near the exploded trailer, which could be compared with other DNA samples after a search of his home. “We have come to the conclusion that a person named Anthony Warner was the bomber,” said prosecutor Donald Cochran. “He was there when the bomb detonated and he was killed in the explosion,” said Cochran.

The 63-year-old was previously not known to the police as a suspect, it said. The investigators initially did not provide any information about what type of explosives the perpetrator had used. They also left open whether the case could still be classified as terrorism because the perpetrator’s motive was still unclear. Such an attack could be considered terrorism if there was an ideological or political motive for the perpetrator.

Police chief Drake stressed that Nashville was now safe. There are no other known threats against the city. Shortly before the explosion early Friday morning, there was a warning to the residents. They were told via loudspeaker announcement from the trailer to leave the area because of an impending explosion. A countdown of 15 minutes began with the announcements. Then there was an explosion. Police officers who were on site were able to bring several residents to safety – according to the investigators, they would also have died without warning.

Pictures from the location of the detonation showed damaged houses, burned out cars and debris on the street. After the explosion on Friday, several fires could be seen on photos; a rising black column of smoke was visible from afar. Mayor John Cooper spoke of “catastrophic damage”. More than 40 stores were damaged, he said. The explosion also damaged a building belonging to the communications company AT&T, which caused many customers in the region to lose telephone and data connections for several days.

After the explosion, the FBI alone was involved in the investigation with around 250 officers. With the help of recordings of the caravan from surveillance cameras and debris, experts were apparently able to quickly establish the connection to the perpetrator. His house on the outskirts of Nashville was searched by investigators on Saturday.

Nashville, often called “Music City”, is the capital of Tennessee in the south of the USA with a population of almost 700,000. It is considered the center of country music because of its many live music bars and record labels.

Which measures do something against the virus?

NEOS on 10 years of children’s rights in the constitution: fully...

Frankfurt – Mayor of the CDU: “Schweizer Platz should be upgraded”

It is essential to clean up your cell phone: 5 things...

Dating Rumors Warmed Up: What’s Going On Between Rihanna And A...