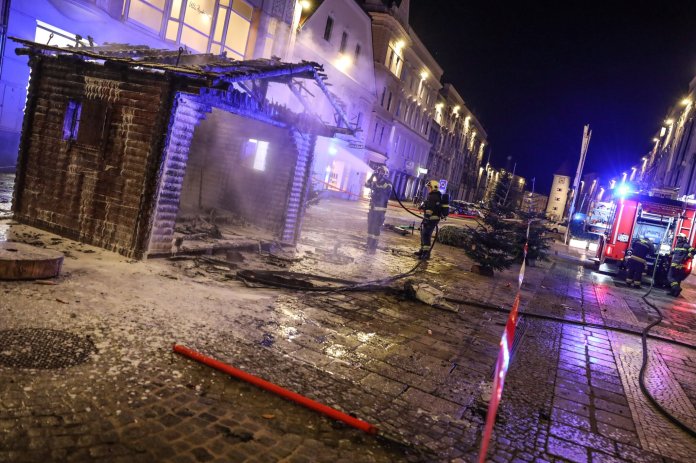 Two young boys are said to have set fire to the Christ child’s hut on the town square. Damage: 20,000 euros.

CATFISH. Shock in Wels: The Christ child’s hut including the wish list mailbox went up in flames on St. Nicholas Day. The police received emergency calls at around 4.15 a.m. When the patrol arrived, the wooden house was already on fire. While the fire department was extinguishing the fire, the officers searched the area. At the same time, colleagues viewed the images from the surveillance cameras on site. Two young men could be seen on it.

After a short manhunt, a 17-year-old from the Kirchdorf district and a 21-year-old Welser were picked up. They came to the Inner City Police Department for interrogation. There the elder stated that he was at the hut at the time of the crime. However, he does not want to have anything to do with the arson. The younger refused to testify. The presumption of innocence applies to both.

After the fact, several city politicians such as Mayor Andreas Rabl (FPÖ) or Peter Csar (ÖVP) expressed their outrage over the “senseless vandalism” on Facebook. According to city marketing, an alternative to the hut and wish mailbox is being worked on, but the letters were secured shortly before the fire.

Now new: True to the motto “Make life in the region better”, Regionalmedien Austria (RMA) have set up a network to make life in the region easier for women and through which women can network on site. AUSTRIA. Regardless of whether you are looking for other interested parties, new career opportunities or carpooling in your free time: You can post free advertisements on mein district.at/frauennetzwerk or via a regional search filter …

DFB Cup: Mbabu and Steffen slide out of the cup

For Beiersdorf: Siemens Energy is included in the DAX

What you should know before vaccination: The most important information

Immunologists seek cause of the multisystemic …

How the visceral adipose tissue defends itself against intermittent fasting

Corona pandemic in the USA: Biden wants to accelerate vaccinations

Football: Flick is irritated after the choice of world coach