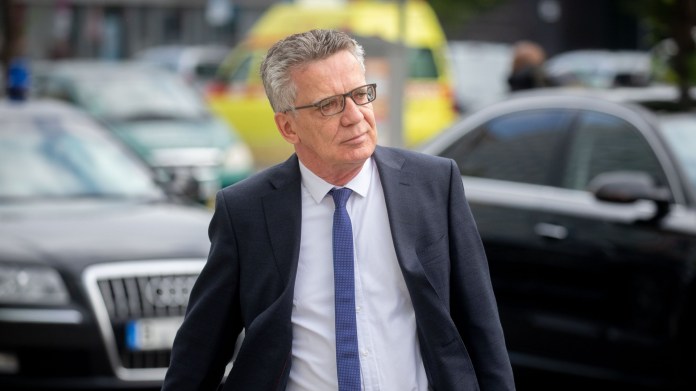 Should de Maizière have been more careful with the protection of the Constitution in the Amri case? Uncomfortable questions await the former Federal Minister of the Interior today in the committee of inquiry.

When the former Federal Minister of the Interior, Thomas de Maizière, is questioned late this evening as one of the most prominent witnesses in the investigative committee, it is almost exactly the fourth anniversary of the Islamist attack on the Christmas market in Berlin’s Breitscheidplatz. On December 19, 2016, the Tunisian Anis Amri killed a total of twelve people and injured around 50 people, some seriously.

De Maizière meets old acquaintances who still have an account with him. The MPs have not forgotten what the ex-minister told them shortly after the attack – in the Interior Committee meeting on January 18, 2017: The only federal authority entrusted with the Amri case was the Federal Office for Migration and Refugees.

To put it into perspective: 2017 was the year of the general election.

A question of responsibility

It was also about rejecting responsibility, believes Irene Mihalic of the Greens. Martina Renner from the Left Party, which has already seen several committees of inquiry, adds: Of all the hair-raising claims made by the authorities, this statement is “one of the highlights of the diversionary maneuvers”.

In fact, the investigative committee has been able to find out in recent years that the Federal Office for the Protection of the Constitution was not only represented in the Joint Counter-Terrorism Center, where the perpetrator Amri was often discussed. The domestic service had also created a personal file on Amri. He also had sources in the Fussilet Mosque in Berlin, where the assassin also frequented.

Admittedly, de Maizière could not have known about all the details of the Islamist attack plans in 2016. Mihalic and Renner think that the Federal Minister of the Interior at the time should have kept an eye on the protection of the constitution.

When did de Maizière realize that the German security authorities had made which mistakes? After all, on January 3, 2017, a few days after the attack, the ex-interior minister warned for changes to the security architecture. Specifically: “a strong state in difficult times”. His suggestion in an “FAZ” article was to “take over” the state offices for the protection of the constitution “in the federal administration”.

Notes not passed on

How disastrously the representatives of the State Office for the Protection of the Constitution in Mecklenburg-Western Pomerania have been presenting themselves for a few weeks, the ex-minister could not have guessed with the best will. The state office in the northeast has not passed on information about the attacker Amri, which an Islamist gave the local authority there in 2017, to the federal investigative authorities. The reason given by the house management in Schwerin: The information was not considered credible and therefore not passed on.

How absurd this reasoning is, Federal Prosecutor General Peter Frank expressed himself last week. At his interrogation last week, he said: Regardless of how valuable the Islamist’s information may have been, the Mecklenburg-Western Pomerania State Office would have been obliged to pass it on to the federal investigative authorities.

Before de Maizière is questioned as a witness, the investigative committee has to pluck a chick with the Mecklenburg-Western Pomerania constitution protection agency. The responsible State Secretary in the Ministry of the Interior there, Thomas Lenz, has to answer questions. The questions for him are extremely delicate.

How can it be that employees of the Office for the Protection of the Constitution arbitrarily commissioned a source to buy a weapon from the Islamist scene? To understand: the domestic intelligence service does not work in Germany, but acts as an early warning system that warns the police if a suspicion is confirmed.

The example shows again, according to Renner, that the constitutional protection offices of the federal states “lead a dangerous life of their own in which they adopt their own laws, act according to their will, do not allow themselves to be controlled and block the investigation”.

For Mihalic and the liberal Benjamin Strasser, this is proof that a reform of the security architecture is needed. “The number of over 40 federal and state security authorities must be reduced,” said Strasser. This is the only way to organize the same, high-quality specialist knowledge in the authorities. His message: fewer authorities, more security.

De Maizière’s statements are eagerly awaited. On the one hand, he is considered correct and loyal. On the other hand, he can speak a little more freely today because he is no longer in the office of Federal Minister of the Interior. If only it weren’t for another federal election in September.

Even Guido is flabbergasted: the candidate becomes “Shopping Queen” after a...

He secretly gave her his number: “Bachelor” candidate would rather the... Criticism does not endanger Johnson’s position