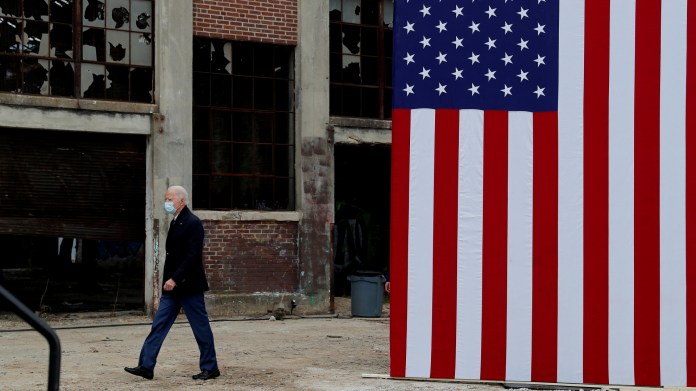 As the new US president, Biden wants to reunite the divided country. Whether he succeeds also depends on how the Republicans will behave from now on.

“I vow to be a president who doesn’t want to divide, but one who sees no red or blue states, only the United States.”

Keeping this promise will be difficult. More than 75 million US citizens have cast their vote for Donald Trump – a record for an incumbent president. And around three quarters of these people believe in electoral fraud. They question the legitimacy of Biden’s presidency before it begins.

“We don’t listen to each other”

Whether it is about fighting the pandemic and the topic of masks, racism, police violence or cultural values ​​and the question of what it means to be an American: the rifts are deep – maybe too deep, says Kris Marsh . The African-American is a sociologist at the University of Maryland. “The damage could already be too great for the new government to bring us together. We talk to each other, but we don’t listen to each other,” she says.

Many Republicans also don’t believe Biden and his team that he is serious about his promise to unite the country. A suspicion that is raised every day by the media loyal to Trump – for example by the conservative commentator Tammy Bruce on Fox News: “For years you have insulted us Trump supporters as Nazis, as racists, as the dregs of society, as idiots. You clearly have no respect for us. “

As evidence, she cites that Biden gave his two sheepdogs a Trump doll to tear up. Photos of it have been circulating on social networks for months. “These politicians – these crooks – say one thing and mean another. But we know that,” says Bruce.

“We can do something”

During the election campaign, Biden had repeatedly emphasized that, thanks to his decades of experience as a senator and vice president, he was in a position like no other candidate to work with his political opponents. But dozens of Republicans in Congress are still refusing to accept him as elected president.

Senate Majority Leader Mitch McConnell also only congratulated after the electoral assembly confirmed Biden as the election winner. A decisive step for which Biden even thanked McConnell in a phone call.

In an interview with late-night talker Stephen Colbert, the Democrat was then optimistic: “I think I can work with the Republican leadership; in the House and in the Senate. We can do something,” he said. “And I believe that as soon as this president is no longer in office, his influence will also wane – and the Republicans will be more willing to cooperate again.”

How much Biden will be dependent on the Republican’s cooperation will be decided on January 6th: in the runoff election for two Senate posts. If the Democrats do not win both seats there, the majority of the Republicans in the Senate will remain – and McConnell could, for example, prevent Biden’s nominations for the cabinet from being approved.

Biden has already undertaken an initial test himself: On the day of his inauguration, he wants to ask the Americans to wear a mask for 100 days – to get the pandemic under control. It is also an indicator of whether they are ready, at least in this case, to overcome the division in the country.

New idea: Ronaldo back to Real, but not as a player

Germany is looking for the superstar: Wendler is only roughly distant

The jungle camp 2021: Jungle show candidate causes ridicule with a...

Iran: Protests in parliament against agreement with UN nuclear authority