The first corona vaccinations started in Germany at the weekend. As of Wednesday, according to current RKI data, more than 78,000 people vaccinated in Germany. Of these, around 37,000 are rounded up on Tuesday, 19,000 on Monday and 23,000 on Sunday.

Most of the vaccinations were carried out in Bavaria, where the number is currently 12,935. North Rhine-Westphalia follows in second place with 11,385 vaccinations, followed by Baden-Württemberg with 8242 vaccinations.

A look at other countries shows that these numbers are still very low in terms of the population as a whole. Israel is the frontrunner when it comes to vaccination. The country decided on a rapid vaccination strategy, vaccinated more than 100,000 people on Monday. In total, more than half a million people have already been vaccinated, more than five percent of the total population and more than 25 percent of those over 60.

Surf tip: You can find all the news about the corona vaccination in the FOCUS Online news ticker

The country with 9 million inhabitants wants to “leave the corona virus behind” in just a few weeks, as Prime Minister Benjamin Netanyahu announced. “In a month we will be vaccinating all citizens over 60 and medical personnel. If we can do that, after another 30 days we can leave the virus behind us, open up the economy and do things that no other country can do. “

Vaccinations would take almost 9 years at the current rate

In Germany it will take some time until then. Because if the daily vaccination quota remains at the current level, the country vaccinates on average 26,000 people a day, it would whole 3192 days take until the total population of 83 million people would be vaccinated. Corresponding almost nine years – In addition, each vaccinated person must also be given a second dose.

If we would proceed at Israel’s pace, that is, every day 100,000 people vaccinate, the time would be reduced to 830 days – still more than two years.

Federal Health Minister Jens Spahn said last week that everyone in Germany will probably be able to offer vaccinations by summer. He did not specify this period of time, nor whether it would allow all Germans to be vaccinated by the summer or just get an appointment.

Once assumed they would by the end of June all 83 million Germans To receive such a vaccination offer and actually be vaccinated by then, the daily vaccination quotas would have to be over 450,000 per day lie.

Only two thirds of Germans want to be vaccinated

In fact, according to the latest survey results, not all Germans want to be vaccinated – only around two thirds. In a survey carried out by the YouGov opinion research institute on behalf of the German Press Agency, 32 percent said they wanted to be immunized as quickly as possible. Another 33 percent are also determined to do so, but still want to wait and see possible consequences of the vaccination for others. 19 percent have decided against a vaccination, 16 percent are still undecided.

Around around 65 percent of Germans, so we would vaccinate around 54 million at the current rate 2076 days need – almost six years.

Surf tip: You can find all the news about the corona pandemic in the news ticker from FOCUS Online

Germany does not have enough vaccination doses available

The fact that Germany is slower compared to other countries is not only due to the local population density, which has to be vaccinated. With a maximum of four million doses by the end of January, the country also initially has fewer vaccine available than Israel, for example, with more than five million.

In order to be able to vaccinate more and faster in the future, the EU announced on Tuesday that it had ordered a further 100 million vaccine doses from the manufacturer Biontech / Pfizer. The vaccine from Astrazeneca has now also received approval in England – should it soon be used in the EU, more people could also be vaccinated in this country: Germany has ordered 56.2 million vaccine doses from AstraZeneca via the European Union.

However, the vaccine is not yet approved in the EU. And that will take some time. The competent authority EMA recently announced that the company AstraZeneca had not even submitted an application for an examination.

However, experts already speak of herd immunity when around 60 to 70 percent of a population is immune. This can be achieved by surviving an infection, as well as by vaccination. Thus, minus the 1.3 million who have already recovered and the other 40 to 30 percent, only 50 to 58 million people would have to be vaccinated in order to achieve herd immunity in this country. At the current rate, we would only need 1923 to 2230 days, ie “only” 5 to 6 years, until everyone receives their first vaccination – after all.

Note: The post was updated with the new RKI figures from Wednesday. Previously, the number of people vaccinated was only around 42,000, so at the current rate it would have taken 10 years for all 83 million Germans to have been vaccinated.

Entry without quarantine only from these countries – politics

Coronavirus in Berlin: Hospitals are calling for federal financial aid

Smartphones up to 300 euros: These cell phones are available for...

In a tight sports outfit, your cleavage becomes an eye-catcher 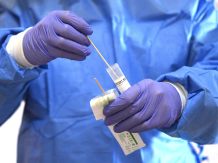