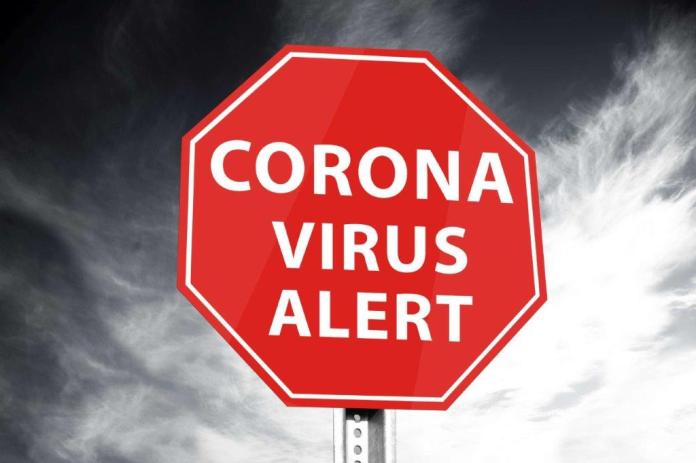 EU Commission chief Ursula von der Leyen has proposed a common start of vaccinations against the corona virus throughout the European Union. “Let’s start vaccinating together as soon as possible, together, when we are 27, with a start on the same day,” said von der Leyen in the European Parliament on Wednesday. Your spokesman emphasized that the EU Commission will decide on the market approval of the Biontech / Pfizer vaccine by December 23.

This means that Biontech / Pfizer’s vaccine could hit the market within two days of the EMA decision on December 21st. According to the EMA report, the final decision on whether the product will be approved in the 27 EU states lies with the Brussels authority.

The European Medicines Agency (EMA) announced on Tuesday that it would give its opinion on the vaccine from Biontech and Pfizer on December 21 – eight days earlier than previously planned. Von der Leyen left no doubt that she was expecting a positive decision. “The first vaccine will finally be approved within a week so that vaccinations can start immediately,” she said. More vaccines would be added next year. “Let us begin together and united to eradicate this terrible virus,” she said. Von der Leyen emphasized that the EU Commission had put together the world’s broadest range of future vaccines and bought more than enough vaccines for all Europeans. (APA / dpa)

First vaccinations in the USA

Following an emergency approval, vaccinations against the coronavirus began in the United States on Monday morning (local time). The television channel CNN broadcast images of the vaccination of a nurse with the means of the Mainz pharmaceutical company Biontech and its US partner Pfizer in the east of the New York borough of Queens.

The United States is currently experiencing another devastating wave of the pandemic with record numbers of infected people, sick people in hospitals and fatalities. Many hospitals report overloaded emergency rooms and a lack of nursing staff for the ever-increasing numbers of infected people. On Monday, the Johns Hopkins University census in the United States was expected to exceed 300,000 deaths since the pandemic began.

Now employees of health facilities and residents of old people’s and nursing homes are to be vaccinated first. It is the largest vaccination campaign in the history of the country, according to CNN, the first vaccinations should start in all states on Monday.

Pfizer and Biontech had also applied to the European Medicines Agency (EMA) for approval of the corona vaccine. The opinion of the expert committee will be available no later than December 29, said EMA director Emer Cooke on Monday in Amsterdam. “European citizens have told us that they want quick approval, but more importantly, they want a thorough review of the benefits and risks of the vaccine so that they can be confident that it is safe, effective and of high quality.”

In contrast to the USA, Canada and Great Britain, the EU does not issue an emergency license. According to the head of the EMA, the conditional marketing authorization ensures that the COVID-19 vaccines meet the EU standards for all vaccines and drugs. At the beginning of the month, the British authorities had given this preparation an emergency approval. Canada, Bahrain, Saudi Arabia, Kuwait and Mexico followed. Russian and Chinese vaccines are already in use in several countries.

The US government has contractually secured the delivery of 100 million vaccine doses from Pfizer / Biontech. The US pharmaceutical company Moderna announced on Friday that the US government was buying another 100 million doses of its vaccine candidate. These cans would be delivered in the second quarter of 2021. The Moderna vaccine has yet to be approved by the FDA, with a decision expected later this week. (APA / dpa)

British authorities have informed the World Health Organization (WHO) about a new variant of the SARS-CoV-2 coronavirus found in Great Britain. Studies were ongoing, as a WHO spokeswoman said in Geneva on Tuesday.

“So far we know very little about this variant,” said physicist Richard Neher, who researches the evolution of viruses and bacteria at the Biozentrum of the University of Basel. It is unclear, for example, whether one of the mutations is associated with reduced recognition by the immune system. The UK authorities are currently researching this, according to the WHO.

Because the new virus variant was detected in more than 1,000 people in the south-east of England in a short period of time, the British authorities are also examining whether it is more contagious than the known variants. “At this point in time, you cannot say whether the variant will actually spread faster,” said Neher. “The sudden occurrence could also be explained by super-spreader events.”

According to the WHO, the already known variants of the virus with regard to the routes of infection or the severity of the COVID-19 disease that it can trigger have hardly or not at all behaved differently than the virus initially identified. So far there has been no evidence from Great Britain that this is different with the new variant. (APA / dpa)

The US Food and Drug Administration (FDA) has classified the corona vaccine from US pharmaceutical company Moderna as safe and effective. In an analysis presented on Tuesday, the authority certifies the vaccine candidate a “positive safety profile”. Data from around 30,350 participants in clinical studies have shown “no particular safety concerns” that would prevent an emergency approval.

The vaccine is also “highly effective” in preventing the outbreak of the lung disease COVID-19 caused by the coronavirus, writes the FDA. The drug authority confirms an effectiveness of 94.1 percent.

Last Friday, following an identical procedure, the drug authority had already issued an emergency approval for the corona vaccine from the Mainz-based pharmaceutical company Biontech and its US partner Pfizer. A large-scale vaccination campaign with the active ingredient began on Monday.

The US is the country with the highest number of registered infections and deaths worldwide and is currently being hit by a devastating new wave of corona. More than 200,000 new cases are added every day, and more than 3,000 deaths have already been recorded on a few days. More than 16.5 million infections have been confirmed since the beginning of the pandemic. The threshold of 300,000 deaths was exceeded on Monday. (APA / AFP)

Can I travel to France? Do I have to wear a mask in Italy? Is there a Corona app in Germany? With such questions, reaching for the cell phone should help with immediate effect. The “Re-open EU” app of the EU Commission (https://reopen.europa.eu/de) offers up-to-date information on the health situation, safety precautions and travel restrictions, for all EU countries and for Iceland’s Schengen members , Liechtenstein, Norway and Switzerland.

Users can also find out about national quarantine and test rules as well as warning and tracking apps, as the EU Commission announced in Brussels on Monday. The app can be downloaded for Android and Apple devices and offers information in the 24 official languages ​​of the EU.

The EU Commission launched the “Re-open EU” website back in June. According to the EU Commission, the site has already been visited more than eight million times. (APA / dpa)

With their fine noses, dogs of the Austrian Armed Forces recognize whether a person is infected with SARS-CoV-2, Defense Minister Klaudia Tanner reported to journalists on Monday. You smell a used mouth and nose mask if the wearer is sick with COVID-19.

During a demonstration at a press conference, a Belgian shepherd dog of the military demonstrated several times in a row that he can safely distinguish a protective mask from a COVID patient from masks from coronavirus-free people. “The search is very quick and is not a big challenge for the trained dog”, Otto Koppitsch from the Kaisersteinbruch military dog ​​center in Burgenland. During training, he easily scanned 250 samples in ten minutes, and typically such a dog would work for half an hour at a time.

The training works completely with virus-free material, and virus transmission is also practically impossible when checking fresh samples, according to the German physicist and zoologist Wolf Kafka: “I believe that Austria is taking a leading position internationally with this development,” he said.

The dogs have been trained by military dog ​​handlers since June 2020 using a method developed by Kafka (SOKKS), which is also used in the search for explosives, drugs, etc.: material is applied to a carrier material in a small tube and the dog is taught by lying down or sitting down to indicate if he gets such a smell. In this case, it came from COVID patients from the University Clinic in Graz and the Military Hospital in Graz, from freshly COVID-19 exposed to intubated patients, according to Kafka.

It was a positive “aha experience” when the dog immediately clearly displayed a COVID-19-contaminated mask in the corridor of the military hospital, which had just come out of the patient’s room, reported Koppitsch: “We knew that the dog’s nose really was is able to identify and display COVID material. ”In order for the whole thing to work in action, the dog would need more routine and exercise. What exactly the dog is sniffing out in the sample is not known, said Kafka. It could be components of the virus such as metabolic products that corona patients have increased, such as messenger substances from the immune response.

According to Koppitsch, it should be tested and assessed whether the dogs can be used by the turn of the year. They would by no means be able to work across the board, but if they were, then only be used on special focal points, such as to check arriving aircraft passengers from risk areas at the international airport in Vienna-Schwechat. (APA)

First Covid-19 patient a year ago at the Giessen UKGM 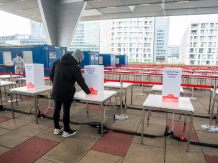 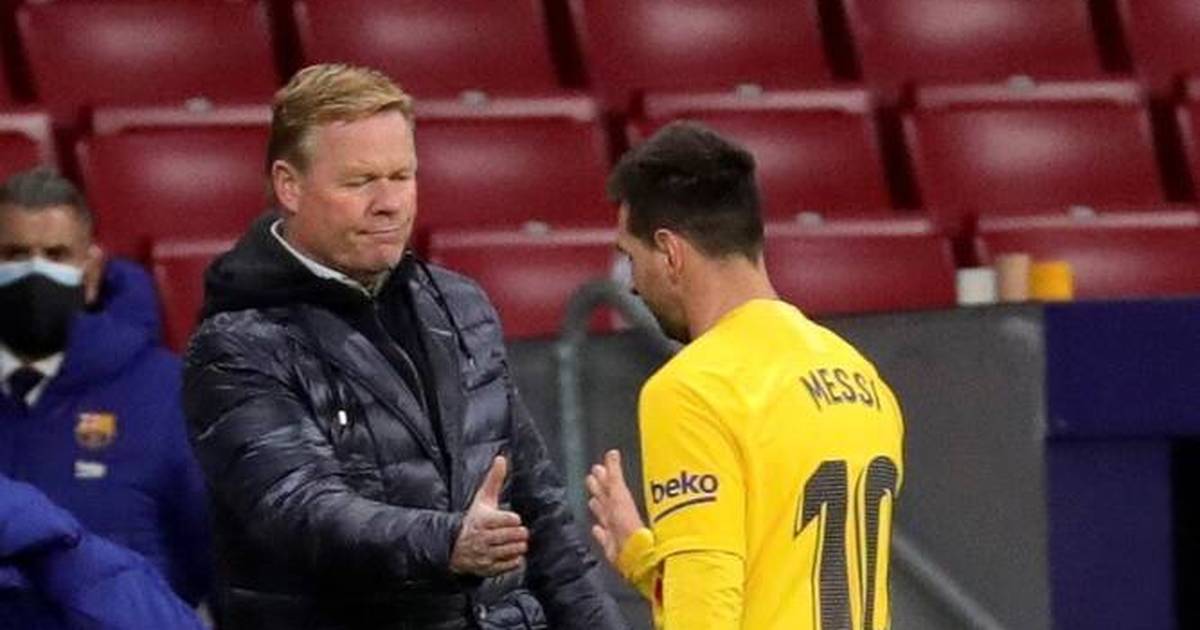 This is how Ronald Koeman reacts to Messi interview Despite lockdown: 1,700 people at parties in Belgrade