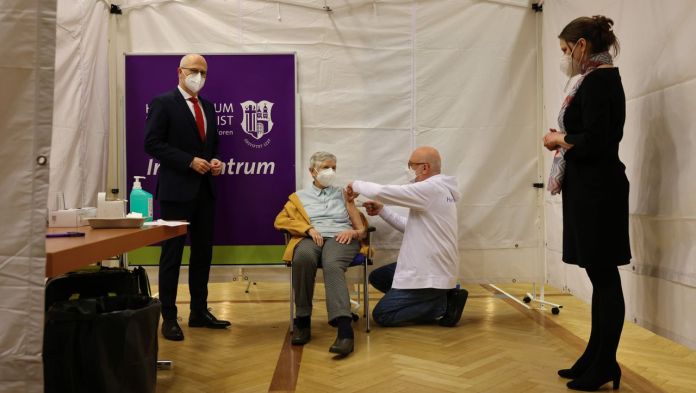 Hedwig Maurer seems to think the excitement that reigns at the Hospital of the Holy Spirit in Hamburg-Poppenbüttel is a bit exaggerated. The resident of the nursing home is one of the first people in the Hanseatic city to be vaccinated against the coronavirus. “I just had to hold out my arm,” says the 91-year-old.

A nurse is straightening the old lady’s cardigan. This Sunday morning after Christmas it is cold, gray and uncomfortable. Apparently, the decision to vaccinate was not a difficult one for Maurer. She was asked and she said yes, she reports. While the first vaccinated are already leaving the building, employee Sabine Kannbach is waiting to pick up their dose. She already feels a little insecure, says the 59-year-old, but she did find out more and it speaks more for the vaccination than against it.

The vaccine from the companies Biontech and Pfizer was only approved in the European Union last Monday. Since the beginning of the week they have been working “at full speed” to prepare for the day, says Frank Schubert, the chairman of the hospital for the Holy Spirit. Among other things, declarations of consent had to be obtained from people who want to be vaccinated. In the case of people with dementia, a carer or authorized representative must give their consent.

He had “less” time to really celebrate Christmas, says Schubert. The information that the vaccinations were about to start was like a “pre-Christmas present”. There were around 20 corona cases in the Hospital of the Holy Spirit in the fall, including some with severe courses. Due to the pandemic, people are constantly worried, said Schubert. Then he has to go – he himself also wants to be vaccinated this Sunday.

Overall, residents and employees are willing to vaccinate, according to the facility. She does not give exact numbers. With around 1200 residents, the Hospital of the Holy Spirit is Hamburg’s largest care facility. 15 mobile vaccination teams are supposed to vaccinate around 500 people this Sunday. However, queues do not form, individual senior citizens run or drive with their wheelchairs into the ballroom, which serves as a vaccination center, as do carers. However, many of the residents are vaccinated right in their rooms. It will take three days for everyone who wants to be vaccinated. You will then have to be given a second dose within three weeks.

9750 units of the vaccine were delivered to Hamburg alone on Saturday. In the other federal states, the largest vaccination campaign that has ever taken place in Germany officially started on Sunday. Tens of thousands of doses are to be administered across Germany on the first day, and by the turn of the year it could be more than a million. Mobile teams are now primarily vaccinating people over 80 years of age in nursing and retirement homes as well as nursing staff and hospital staff at particular risk.

One day earlier than planned, a 101-year-old was the first to be vaccinated against Corona in Germany on Saturday. The operator of the retirement home in Saxony-Anhalt, Tobias Krüger, obviously didn’t want to lose any time. “Every day we wait is one day too many,” he said. The district office had previously asked him whether everything was prepared in the home.

While residents and carers are being vaccinated inside the ballroom of the senior citizens’ facility in Hamburg-Poppenbüttel, Bärbel Kukelies and two neighbors are standing in front of the building. The three women live in their own apartments on the premises of the Hospital of the Holy Spirit, but can – if necessary – receive support. It’s called “living with service”. Despite the cold, they came here to see the whole thing. On the one hand, they know many residents, on the other hand, Mayor Peter Tschentscher is also there. “All the best,” calls out one of the three when Karin Sievers, who is sitting in a wheelchair in a dark blue coat, is brought back towards her accommodation.

“Much too early to think about easing”

The 84-year-old Sievers was the first woman from Hamburg to receive the vaccine – in the presence of Tschentscher and Social Senator Melanie Leonhard (both SPD). “We expected this day for a long time,” the politician says a little later. Every vaccination that someone gets can help prevent a serious course of the disease. Step by step you would find »the way out of the pandemic«.

Tschentscher thanks everyone who participated in the preparation. He also refers to the history of the around 800-year-old facility: it has already experienced a few pandemics, but with the corona vaccine it is the first time that active action can be taken against it. “We want to vaccinate as many people as possible as quickly as possible,” he said, but, given the still high number of infections, he also warned against hoping for a quick recovery: It is still far too early to think about easing.

Bärbel Kukelies also wants to be vaccinated on Monday or Tuesday. “The decision was made for you,” she says. She does not mean compulsory vaccination, but sees it this way: The risk of developing Covid-19 is higher than the possible side effects of the vaccination.

With material from the news agency dpa

Glory and misery of a decade

Thai King: did Rama X beat his sister in the hospital?...

Corona and the miracle weapon gut: a healthy diet can protect...