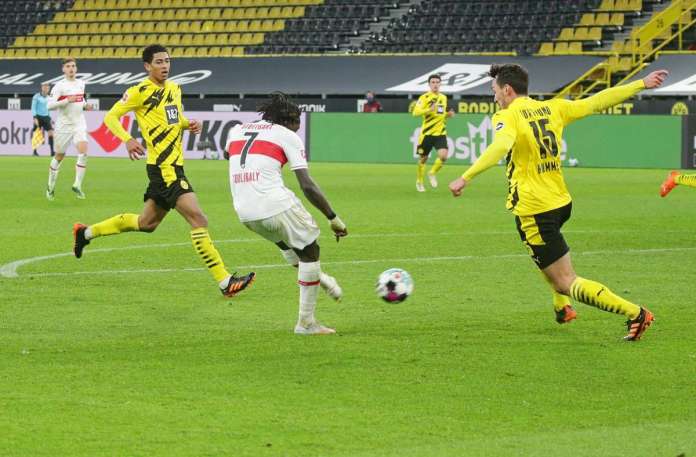 VfB Stuttgart wins again in Dortmund after 14 years – with a whopping 5: 1. The Pellegrino Matarazzo team is convincing in all respects. But how can this coup be explained?

Dortmund – Nicolas Gonzalez simply ran away from Dortmund. Orel Mangala had sent the VfB Stuttgart striker on his way to the Borussia goal again – and the substitute Argentine did not have to be asked twice: goal to make it 5: 1 and the final point in the memorable encounter at Signal-Iduna-Park.

Yes, the newcomer from Stuttgart not only won against the Champions League participant, he dismantled BVB coach Lucien Favre’s team in the Bundesliga. “That was great fun. The guys in front of me gave it all. This success will give us a lot of self-confidence ”, said VfB goalkeeper Gregor Kobel in the first ecstasy of joy.

“We were very sharp, very present. We acted as a brutal unit to the front and back, ”said VfB trainer Pellegrino Matarazzo, as usual. The reward: VfB won again in Dortmund for the first time in 14 years – and the Matarazzo team are still unbeaten after six away appearances in this round abroad. She impressed in Dortmund from the first to the last minute in stoppage time when Gonzalez scored his fourth goal of the season.

Previously, Silas Wamangituka (26th / foul penalty and 52nd) had met twice as well as Philipp Förster (60th) and Tanguy Coulibaly (63rd). Especially after the change, the guests were efficient. The chances that the team with the red chest ring on the jersey had earned from kick-off were now converted into hits. “Compared to the game against FC Bayern two weeks ago, we used our opportunities this time,” said Förster.

Wamangituka turned it up again. The Congolese is in seven goals of the season after the eleventh match day – and the Stuttgart team is in good shape. But not only Wamangituka was unbelievable for the BVB defensive. “VfB played brilliantly. He was aggressive and determined. That’s exactly what we weren’t, ”said Mats Hummels. The chief of defense, like his colleagues, was disappointed. With which the trainer Lucien Favre is again in need of explanation. “It was a disaster, what we offered,” said the Swiss.

After the bankruptcy, Favre’s future should be around the former Westfalenstadion. Coulibaly and Förster, who moved into the starting eleven for the suspended Gonzalo Castro, also hit the hosts. And if Mateo Klimowicz (was fouled in the penalty area by Emre Can before the penalty) had drunk more target water, then the black and yellow would have been behind in the first half. With a technically wonderful goal from Giovanni Reyna, BVB equalized (39th). That was flattering, as the goalkeeper Roman Bürki had saved several times against the Stuttgart.

The crux of the game

After the break, however, there was no stopping them. Mangala brought VfB to victory with a strong conquest of the ball, because the midfielder then served Wamangituka – 2-1 (52nd). “The crux of the game,” as Favre said. Because after that, the Stuttgart could no longer be stopped. They often only combined with a ball contact. Everything looked playfully easy. After preliminary work by Borna Sosa, Förster shot a thoughtful one (60th). Afterwards it was to be got over that Klimowicz only hit the inside post (62nd). Just a minute later, after Coulibaly’s action, the ball jumped from the aluminum into the net.

Without the injured striker Erling Haaland, BVB couldn’t offer that much speed and passion. And on the VfB side? “I could throw up confetti, I’m so happy about what I was able to see,” wrote CEO Thomas Hitzlsperger about the coup on Twitter. However, the Stuttgart only want to enjoy the moment now. With 17 points they are in seventh place in the table. That is better than many experts and fans had given VfB credit for. “We want to stay on the ground,” said Matarazzo. On Tuesday it will continue against Union Berlin in their own stadium.

Ibrahimovic lets Milan continue to dream of the title – Serie...

Mink bodies could be dug up again

Bayer Leverkusen: Bender twins end their careers at the end of...