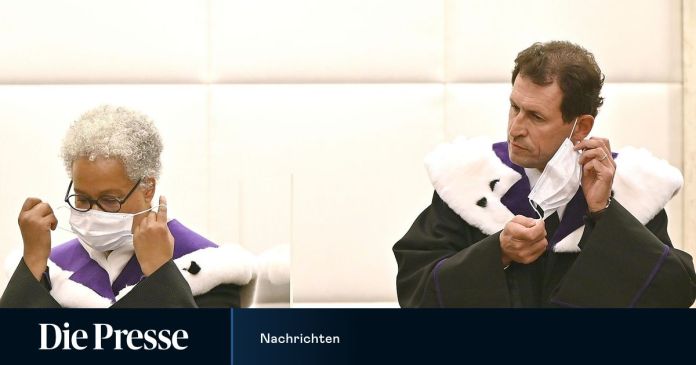 The Constitutional Court has lifted the controversial Turquoise-Blue headscarf ban in elementary schools as unconstitutional.

The Constitutional Court (VfGH) has lifted the headscarf ban in Austria’s elementary schools since autumn 2019 as unconstitutional. The controversial law was passed during the ÖVP-FPÖ government. The constitutional judges justified the decision that the regulation single out a certain religion, Islam, without further justification, which contradicts the requirement of religious and ideological neutrality of the state.

As VfGH President Christoph Grabenwarter explained in his statement on Friday, the principle of equality in connection with the right to freedom of thought, conscience and religion justifies the state’s religious and ideological neutrality. The ban introduced by the turquoise-blue government does not explicitly refer to the wearing of an Islamic headscarf. In the legal materials on the School Education Act, however, the intention of the legislature is expressed that the wearing of an Islamic headscarf should specifically be prohibited.

The lifting of the headscarf ban had demanded two children and their parents who are brought up in accordance with the Sunni or Shiite legal school of Islam. They saw it as a disproportionate interference with religious freedom and religious upbringing – and also a violation of the principle of equality because the hijab was forbidden, but the Jewish kippah or the patka of the Sikhs was not.

As President Grabenwarter explained, the ban on headscarves in elementary schools in force since autumn 2019 violates the principle of equality and freedom of religion. “The regulation (…) excludes Islamic origin and tradition as such,” criticized Grabenwarter when the highest judge announced the decision. The written knowledge is not yet available and will be delivered later.

The headscarf ban decided by the ÖVP and FPÖ in 2019 is formulated in a religiously neutral manner for the time being. Until the end of the school year in which they turn ten, it prohibits schoolchildren from “wearing ideological or religious clothing that involves covering the head”. However, the law of the ÖVP and FPÖ was explicitly justified as a ban on the Muslim headscarf.

“School is based on basic values ​​of openness and tolerance”

Grabenwarter also referred to this in the reasoning. He emphasized that the text of the law did not specifically target the Islamic headscarf. However, this intention of the legislature is expressed in the legal materials. That is why the Constitutional Court has also interpreted the law, which allows for several possible interpretations.

With this, however, the headscarf ban violates the state’s religious and ideological neutrality, as Grabenwarter explained. This requirement must be observed by treating different religions in schools based on the principle of equality. “The school is based among other things on the basic values ​​of openness and tolerance.” Interventions must therefore be objectively justified and proportionate.

Headscarf ban as a stigma

With the headscarf ban, “Islamic origin and tradition as such are excluded,” criticized Grabenwarter: “The prohibition of the Islamic headscarf, which selectively covers a single religious or ideological clothing regulation, deliberately stigmatizes a certain group of people.”

In addition, the constitutional judges warn that a “selective prohibition regulation” could have a detrimental effect on the inclusion of affected schoolgirls: “It carries the risk of making it more difficult for Muslim girls to access education or of marginalizing them socially.”

“Ban hits schoolgirls who do not disturb school peace”

The government’s argument that schoolgirls should be protected from social pressure (wearing the headscarf, note) is insufficient for a ban from the point of view of the Constitutional Court. The fact that there can be ideological or religious conflicts in schools does not justify a selective headscarf ban. Because: “This prohibition applies to schoolgirls who do not disturb the peace at school.”

It is incumbent on the legislature to find instruments for conflict resolution while maintaining the principle of neutrality and the constitutional educational mandate and to provide the necessary resources to end religiously based bullying, explained Grabenwarter. The written decision of the highest judges should follow in the coming days.

IGGÖ: “Against coercion of any form”

For the Islamic Religious Community in Austria (IGGÖ), the lifting of the headscarf ban marks the end of populist bans. The decision proves “that our trust in the rule of law and our patience have paid off,” said President Ümit Vural in a broadcast on Friday. At the same time he affirmed: “The IGGÖ is against any form of coercion.”

“The implementation of equal opportunities and self-determination for girls and women in our society cannot be achieved through bans,” said Vural. “We neither approve of a derogatory attitude towards women who decide against the headscarf out of personal conviction, nor can we agree to the restriction of religious freedom of those Muslim women who understand the headscarf as an integral part of their religious practice.”

In addition, the IGGÖ President appealed to the political decision-makers to take measures “in order to curb the increasingly racist tendencies in Austria that stand in the way of social cohesion”.

Before the federal-state summit: Merkel’s lockdown problems are growing – politics

WHO: Worldwide increase in new infections after weeks of decline

Violence at Joe Biden’s Inauguration? There are three horror scenarios

Corona news on Thursday: Bernd Althusmann pleads for hotels to be...

Interest in Jayden Braaf – Will Dortmund get the next top...

To and from Great Britain: EU wants to relax travel bans