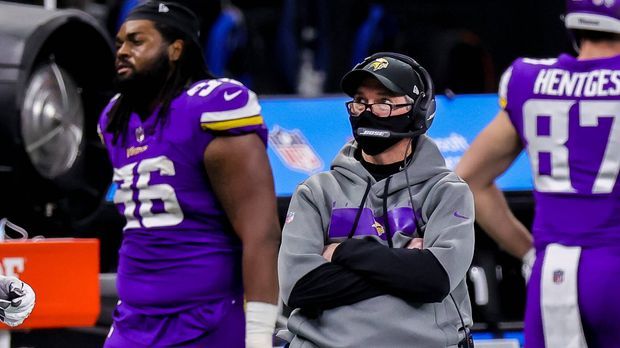 Munich – You can criticize your team. You can also criticize it harshly. As a head coach you even have to do it every now and then. As so often, it depends on the balance and the manner.

Vikings coach Mike Zimmer was so served after the 33:52 against the New Orleans Saints that he didn’t even care that he trumpeted his criticism in public.

Because the words may have been appropriate, but they were hearty nonetheless.

“That’s a bad defense,” said Zimmer, adding to it: “The worst I’ve ever had.”

It must be said: This defense allowed Alvin Kamara to set a 91-year-old NFL record with six touchdowns. She allowed a total of 52 points, which a Vikings defense did not happen for a long time.

“I’m really disappointed defensively,” said Zimmer. “You have to work really hard to drop 52 points.” With the bankruptcy, the Vikings are also finally eliminated from the playoff race, but the chances were only minimal anyway. Little consolation.

The defense is the weak point due to several failures and free agency exits throughout the season, it is in relevant statistics such as “total yards” (391.7 per game), in the pass defense (256.9 yards) or against to always find the run (134.8 yards) or the allowed points per game (29.3) in the back third.

Zimmer, who shouldn’t have to worry about his job after his contract extension before the season, knows that his defense is “a little understaffed”, “but they should play better,” he said. “Really, it wasn’t so much the six touchdowns, but rather that they crushed us from the start. We couldn’t stop them.”

He’s not trying to make excuses, “it was embarrassing today,” and the absence of injured people like defensive end Danielle Hunter, defensive tackle Michael Pierce, linebacker Anthony Barr or linebacker Eric Kendricks is no excuse, Zimmer said, “because these guys wear an NFL jersey, they have to play accordingly. ”

Thai King: did Rama X beat his sister in the hospital?...

No more confusing chats in WhatsApp: Messenger with a new feature Immunologist for corona reinfection: case from the Black Forest is a...

After vaccinations: Corona outbreak in nursing home in Itzstedt | ...