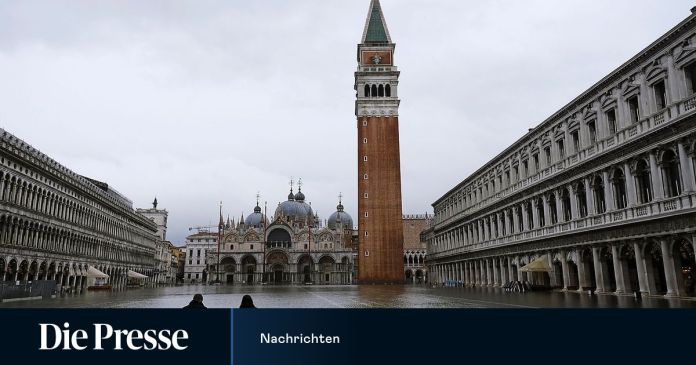 The dam system was not activated in time because meteorologists had not expected such a tidal wave.

Unexpectedly strong sirocco wind drove the water level in the lagoon city of Venice to 138 centimeters on Tuesday, eight centimeters more than the meteorologists had predicted. The lagoon city was flooded without the MOSE dam system being activated in time. Water also entered St. Mark’s Basilica. “If the water continues to rise, the chapels inside the basilica will also be flooded,” warned the authorities, according to local media.

The community stated that the MOSE dam system had not been activated because the weather experts had expected a tidal wave of 130 centimeters on Tuesday morning. The worsening weather situation suddenly occurred, so the city reacted unprepared.

The use of MOSE must be planned 48 hours in advance. The dam system had been used twice in the past few days to keep the lagoon city dry. In the night of Wednesday, the barriers are to be erected to protect the lagoon city from another tidal wave, reported the Mayor of Venice, Luigi Brugnaro. He admitted that the procedures for setting up the dam system needed to be changed. Brugnaro said that a pre-alarm system had to be introduced even when the tidal wave was low.

The flood brings back memories of the drama that happened 13 months ago in the lagoon city. On the night of November 13, 2019, Venice was inundated by a catastrophic tidal wave. The water – driven by sirocco wind – rose to 187 centimeters above sea level. That was the highest level since the devastating flood in 1966, when 194 centimeters were reached.

Venice has not been the same city since that dramatic night. The symbol of mass tourism, in whose alleys up to 130,000 people cavorted every day, has come to a standstill. Although the UNESCO city repaired the damage relatively quickly, the tourists have stayed away since the dramatic November 2019. Three months after the “Acqua alta”, as the Venetians call the familiar phenomenon, the coronavirus epidemic broke out in northern Italy, forcing the lagoon city and all of Italy to an unprecedented lockdown. Since then, Venice’s tourist and economic decline has begun, with no end in sight.

The MOSE mobile dam system was successfully used for the first time in October. Despite “Acqua Alta” of 125 centimeters, St. Mark’s Square remained dry. Bureaucracy, corruption scandals and different political and economic interests had repeatedly delayed the billion-dollar project. In December the dam system was switched on twice.

All of Italy has been covered by a bad weather front for days. Veneto regional president Luca Zaia spoke of damage in the northeast region of up to 500 million euros. According to the civil protection authority, the highest weather warning level was red on Tuesday for the regions in northeast Italy and around Rome and south of it.

Frankfurt am Main: Right lane closed on A 66 between Kelkheim...

Formula 1: focus on returnees and debutants

You have to provide these data from Friday upon arrival –...