Much Fresh snow and have strong wind in Tirol increase the avalanche danger. The avalanche warning service called for East Tyrol on Sunday highest warning level 5 out. The report said that spontaneous avalanches, “occasionally also extremely large”, are to be expected. Large and very large sliding snow avalanches are to be expected on steep slopes below around 2600 meters. There is also a high risk of avalanches in South Tyrol.

Up to 1.10 meters of fresh snow expected on Sunday

On Sunday should be up to 110 centimeters of fresh snow fall. On Saturday a slab went in Prägraten at Großvenediger, as the police announced. There are four houses and a vehicle damaged been, no one was hurt. About 100 people had to be brought to safety. The snow masses also invaded a sheepfold and an inn. In the north of Tyrol, the second highest warning level was 4. Avalanches could reach the valley there and endanger traffic routes, it said. Hotels and restaurants in Austria are closed until January 6th due to the corona pandemic.

Brenner motorway closed due to snow

Because of the heavy snowfall also in Südtirol train connections at the burner are interrupted. Also the Brenner motorway on the important connection between Italy and Austria was partially closed on Sunday.

The Italian railway company RFI announced on Sunday that there are closures on the train route between Brenner and Bolzano. Since Saturday evening, the northern lane from Sterzing to the border on the Brenner motorway has been closed due to the risk of avalanches, as the civil defense in Bolzano announced. There is a “patchwork quilt” of power outages throughout South Tyrol. In some areas the highest avalanche warning level was applied. Around 1400 firefighters have been on duty since Sunday morning.

Snow and slippery weather expected in the southwest

And what about the southwest? At the Sunday According to the meteorologists, it remains overcast in the morning, it should only rain sporadically. In contrast, it snows in the mountains. In the evening it rains more and more heavily, in lower altitudes the weather experts take this into account snow. The maximum values ​​are minus one degree in the mountains and five degrees in the Kraichgau.

The new week starts in Baden-Wuerttemberg uncomfortable. According to the German Weather Service, it will be on Monday very cloudy. Meteorologists also expect rain, but snow in the mountains. During the day the clouds loosen up and it becomes dry. The maximum values ​​are zero and seven degrees. As well on Tuesday it stays cloudy, but mostly dry. In Upper Swabia the weather experts expect fog. The maximum values ​​are minus two to plus three degrees.

Accidents and snowfalls in Bavaria too

Ice and snow led to several accidents in Bavaria over the weekend. On Monday night it should be in Bayern snow again. Especially in

the German Weather Service (DWD) expects snow. Between the Allgäu Alps and the Mangfall Mountains, up to 25 centimeters of fresh snow is possible until Monday morning, in the high mountains sometimes up to 50 centimeters.

The “small” WAC in the “big” European Cup 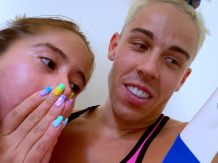 Criticism – this is how “bottom” of Vienna becomes