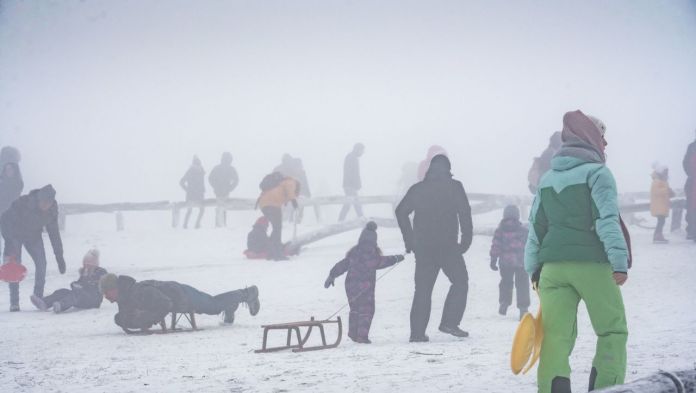 Snow and winter temperatures are likely to determine the last days of the coming year in some regions of Germany. After a white blanket had already spread over the weekend on the Feldberg in the Black Forest (51 centimeters) or on the Großer Arber in the Bavarian Forest (16 centimeters) and on the Fichtelberg in the Ore Mountains (8 centimeters), the snow remains in the low mountain range first lie, as a meteorologist from the German Weather Service (DWD) announced. Accordingly, a snow depth of 1.45 meters was measured on the Zugspitze at the weekend.
According to the weather service, there are thick clouds across the country on Monday, which could cause sleet, snow showers, but also rain. “In the coming days, too, some flakes will fall into the valleys. The snow hardly stays below 400 meters, ”said the meteorologist. The temperatures rise accordingly in the east and south-east to values ​​between 0 degrees and 4 degrees. Permafrost may persist in some areas.

Snowfall in the mountains, squalls on the peaks

In the northeast, it usually stays dry. There the temperatures are expected to be between 0 and 5 degrees, in the west and southwest the thermometer could show up to 7 degrees at lower altitudes. Along the Alps, foehn and individual squalls must be expected on the higher peaks.

On the night of Tuesday, according to the DWD, precipitation falls from the south and south-west, which extends in a band across the country to areas of east and north-east Germany. The precipitation could stay at lower altitudes for a short time as snow or sleet. Otherwise, at most, little rainfall can be expected. At temperatures between 2 degrees and minus 5 degrees, however, there is a risk of ice.

On Tuesday the weather is changeable to cloudy with showers in the valleys and snowfall in the mountains. The temperatures during the day are between 2 and 7 degrees, according to the DWD, there is light frost in the mountains. There could also be strong gusty winds blowing from the south or the southwest. Storm gusts threaten on the peaks.

In short, the WKStA wants to refute “incorrect facts”

Who is stealing the show from me? (ProSieben): Thomas Gottschalk...

Loss of diversity as a breeding ground for corona pandemic –...

Many children in emergency care: Berlin is looking for solutions to...