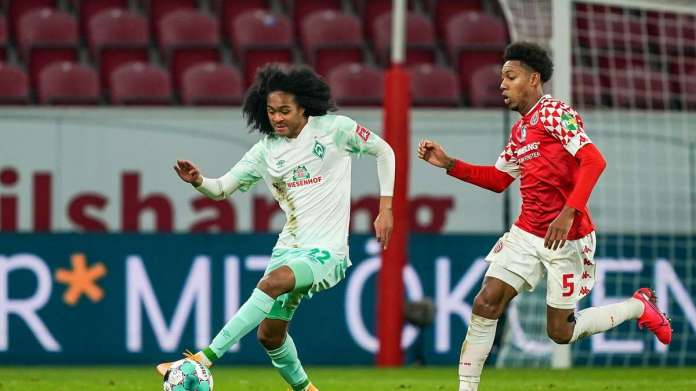 Mainz – A rumor popped on the Internet on Friday: Allegedly, Manchester United should think about ending Tahith Chong’s loan to Werder Bremen early in January because the 20-year-old is too rarely used. Werder sports director Frank Baumann was surprised at the news – and Chong gave his own answer with his first assist in the Bundesliga to the 1-0 win in Mainz. Conclusion: The 20-year-old will stay in Bremen until the end of the season.

“Well, I haven’t heard from Manchester that they are dissatisfied. In any case, we are not, ”emphasized Baumann. Tahith Chong be an important part of the squad. This is also supported by the fact that the young Dutchman has only missed two games this Bundesliga season. But apart from the goal in the 2-0 victory in the DFB Cup at the regional division Carl Zeiss Jena, Chong could not yet score anything Werder Bremen – and that is what a striker always looks for. Overall, Chong often seemed very far from a Bundesliga level and was rarely able to assert himself decisively.

Werder Bremen: Tahith Chong against Mainz 05 with first assist – and against Hannover 96 in the starting line-up?

Versus Mainz 05 but now he stabbed as a joker. He put himself in a good position for a cross that Eren Dinkci headed for the winning goal. “A nice cross”, praised coach Florian Kohfeldt: “Tahith played a big part in this goal.” This sense of achievement will do the 20-year-old good. For the first few months in Germany, the striker had apparently imagined differently, as Kohfeldt indicated: “Today I coached him again in the game to get more into the open interface to bring his speed more into play and this dominance in the To broadcast one-on-one. He himself expected more that it would go faster. But it was clear to me that it could take a while. “

Kohfeldt is now very satisfied with the development of his attacker, also defensively Tahith Chong gained in stability. “I see Tahith on the right path in terms of the second half of the season,” said the coach and added with a wink: “Maybe on Wednesday.” Then it goes for Werder Bremen in the DFB-Pokal for the second division Hannover 96 – and Chong may be waving a place in the starting line-up, which they would definitely welcome at Manchester United. The English want the Dutch U21 international to mature in Bremen in order to benefit from him from summer 2021. (knee)

The academy’s painting gallery with a special exhibition on Van Dyck’s...

These headphones put you in a new dimension

Football – Frankfurt am Main – Digital consultation hours of the...

The schools remain open – of 1000 high school students in... US lawsuit against Volkswagen: Wolfsburg wanted to “destroy” suppliers