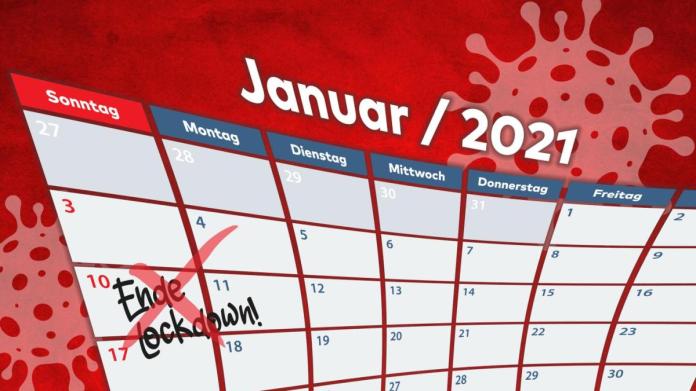 Upoliticians and experts call for a comprehensive shutdown of public life in Germany. NRW Prime Minister Armin Laschet (CDU) would like a “quickest possible lockdown in all of Germany”. According to the will of Bavaria’s Prime Minister Markus Söder (CSU), a hard lockdown would have to start before Christmas. Saxony has already decided on the restrictions.

Almost in unison, politicians and experts also name January 10th as a possible end date for the lockdown. Söder linked his request with the appointment. Hesse’s head of government, Volker Bouffier (CDU), considers the specified deadline to be the right time. And Chancellor Angela Merkel (CDU) referred in her speech to the German Bundestag to a paper by the National Science Academy Leopoldina, which also recommends a hard lockdown by January 10th.

A new lockdown in Germany could begin as early as next week. But a look back at the previous appointments of the federal and state governments shows that the prime ministers could never keep their plans. An end to the lockdown in early January already seems utopian.

In the spring, easing was postponed twice

In the first wave, the prime ministers met on March 12 for the crisis summit. It is the day that is considered to be the beginning of the lockdown in Germany. In the days that followed, schools, daycare centers and shops were closed. A week later, on March 22nd, restaurants and hairdressers followed, if the federal states had not already banned them from operating.

In the past few months, politicians have repeatedly communicated deadlines that were not met

The pandemic continued to spread, the measures – initially limited to mid-April – were extended by the federal states until the end of the month. On April 15, the federal and state governments agreed to open retailers with less than 800 square meters of retail space – the first easing after 35 days. For comparison: From December 14th to January 10th there are 27 days, from Christmas Eve only 17 days.

In mid-April, the federal and state governments announced that schools, restaurants, hairdressers and beer gardens would open from May 4th. The alleged easing, which parents, children and entrepreneurs had hoped for, took the Prime Minister back after two weeks. Instead, only church services and visits to the hairdresser were allowed again. The prime ministers then pushed through their plans for a return to class at the federal-state meeting on May 6 – 56 days after the start of the lockdown.

In contrast to the first wave, most German citizens have internalized the AHA rules. The contemplation of the Christmas season could slow the spread of the virus. On the other hand, in Germany and neighboring countries, border closings, which existed in the first wave, have so far not been closed. Respect for the novel virus has also declined. To what extent the first lockdown will differ from the second lockdown – even beyond adapted measures – is therefore uncertain.

“Lockdown light” should be a four-week therapy

But even a look at the past six weeks shows how the federal and state governments were unable to meet the deadlines they chose. The “lockdown light”, which the Prime Minister and the Federal Chancellor decided at the end of October, was intended to take away people’s incentives to meet by closing restaurants and cultural institutions. “We prescribe a four-week therapy,” said Markus Söder after the decision.

At their unscheduled Prime Minister’s conference on November 25th, the state leaders and the Federal Chancellor passed a tightening and extension of the “lockdown light” beyond the actual end date on November 30th. Stricter contact restrictions, retail requirements and early Christmas holidays should reduce the number of new infections. With an incidence of 200 new infections per 100,000 inhabitants within a week, they set a new limit from which municipalities should introduce measures such as curfews – de facto a hard lockdown in an easy one. The new measures should apply until at least December 20th.

This date is also wasted a week later. The federal and state governments agree on an extension of the “lockdown light” until January 10th. The next prime ministerial conference is planned for January 4th, but if you believe media reports and suggestions from prime ministers, the next federal-state summit is due on Sunday. Even the exceptions for Christmas – actually, meetings of up to ten people should be allowed – Thuringia has already collected again, Berlin has not even implemented. Other countries shortened the exemptions to three days. If the hard lockdown now follows, January 10th could also be deleted from the calendar.

Researchers at Saarland University have calculated three lockdown scenarios using a mathematical model. The target value of 50 new infections per 100,000 inhabitants could, if at all, only be achieved by January 10th with a “comprehensive hard and rapid lockdown”, as the researchers write. There shouldn’t be any exceptions for Christmas. In the event of a comprehensive hard lockdown only after Christmas, the targeted incidence value across Germany would not be reached until the end of January at the earliest. The researchers therefore advocate an early lockdown.

“Without further strict measures before Christmas, the number of cases will continue to increase and lead to several thousand additional corona deaths in January,” warns Thorsten Lehr, Professor of Clinical Pharmacy at Saarland University. However, he advises against giving the lockdown an expiration date. “That gives a security that is not there,” said Lehr WELT. “It’s good to set a milestone. But politicians should clearly communicate that this is not the day when the lockdown is over. “

Some federal states, including Saxony and Thuringia, are calculated not to have reached the target on January 10, despite a tough lockdown. In addition, the scenarios described are optimistic because they do not take into account the rise in the number of cases in the past few days. Lehr also recommends taking a nationwide approach in order to avoid migration. Finally, a concept of how things will continue after the lockdown is needed. “The beginning of February is the main infection time,” says Lehr. “It’s going to be a hard winter.”

Rally continues: New record: Bitcoin rises to 28,500 US dollars for...