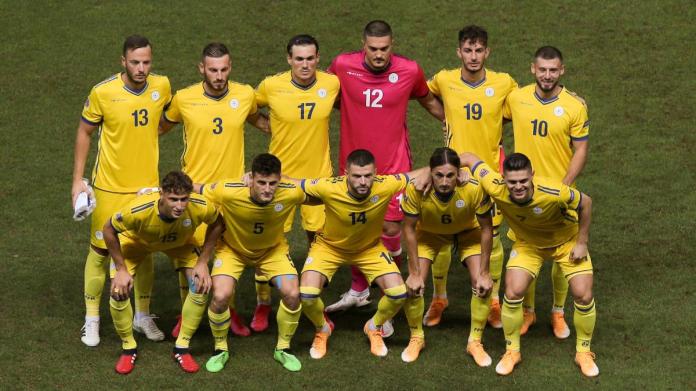 Three of the four opponents do not even recognize Kosovo

What to do with a national team whose nationality is not recognized by the opponent? This is what Kosovo is doing in World Cup qualification. The team was initially drawn into another group. There are special problems with a counterparty.

Dhe problem creates diplomatic confusion and is unlikely to be easy to solve. Because at the moment it is far from clear whether and how the qualification for the 2022 World Cup in Qatar can be played in European Group B. After all, how should games be played against a national team that their opponents should not actually see as a national team?

It’s a curiosity that caused difficulties when the groups were drawn on Monday evening. The team from Kosovo, a state entity on the territory of the former Yugoslavia, which until 2008 belonged to the Serbian state territory, was originally drawn into group A – a group in which, unfortunately, Serbia plays. But the Serbs still see Kosovo as one of their provinces. There is also a lot of resentment between the Serbs and the mostly Albanian population of Kosovo.

So Fifa hoped to be able to solve the problem by simply assigning the Kosovars to a different group. The trouble was: Even in Group B, three of the four opponents the Kosovars would have to play against do not diplomatically recognize Kosovo – Spain, Greece and Georgia. Only Sweden is one of the 22 out of 27 European Union (EU) states that consider the Republic of Kosovo to be an independent country. Even if, among other things, it does not recognize Kosovo, it does not mean that the Games will not take place. According to Fifa regulations, the games can then be played in a neutral location.

When Shaqiri formed the double-headed eagle

This is particularly sensitive with regard to the games between Kosovo and Spain. Because the Spanish government forbids the national team to compete against the representation of a country that is not recognized under international law. This, so the diplomats in Madrid fear, could otherwise cause domestic tensions. After all, the Spaniards have had to deal with the Catalans’ aspirations for independence for years.

The games of the Kosovars against Greece and Georgia could, however, probably be carried out. In Athens and Tbilisi they are not happy about this fact either, but at least there is no explicit ban on playing against Kosovo.

In any case, the problem will occupy Fifa and the associations for longer. There had already been problems in the past due to the political unrest in the Balkans. A scandal broke out at the 2018 World Cup when the Swiss national team Xherdan Shaqiri and Granit Xhaka celebrated their goals with a special gesture in the Confederates’ 2-1 victory over Serbia: They formed the so-called double-headed eagle with their hands – that Albanian flag symbol.

Shaqiri and Xhaka have Albanian roots, and with these gestures they protested against Serbia not recognizing Kosovo as an independent country. Both players then had to pay a fine of 10,000 euros each and received a warning.

Mladen Krstajic, the Serbian coach, was also sentenced to a fine of 5,000 francs after the game. After the German referee Felix Brych had withheld what he believed to be a legitimate penalty from the Serbs, the ex-professional from Schalke 04 said about the referee: “I would send him to The Hague to be tried, just like we have been tried. ”An allusion to the war crimes tribunal, where numerous Serbs were tried for their crimes in the Yugoslav civil war between 1991 and 1999.

The dilemma surrounding Kosovo shows that football is still struggling with the consequences of the breakup of Yugoslavia. In fact, even twelve years after its proclamation, the republic, with around 1.9 million inhabitants, is not considered a sovereign state under international law. Around 40 percent of the members of the United Nations (UN) do not recognize them. It is officially considered a “stabilized de facto regime”.

The Kosovar Football Association was only accepted as a member by Fifa on May 13, 2016. Comments on the draw were held back on the association’s homepage. Understanding was expressed that Fifa wanted to “evade the confrontation with Serbia”. “Fate wanted Kosovo to be included in Group B,” it says in a nutshell.

Grenke in the 4th quarter with a significant decline in new...

“The Rosenheim Cops”: Inspector Anton Stadler is back

These deals are really worth it!