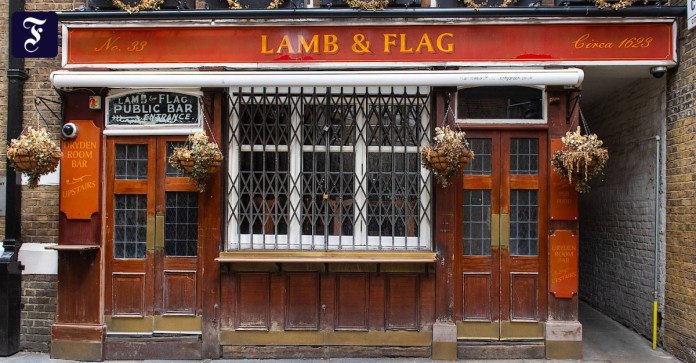 MAnother pub closure made it into national news: In Oxford, Lamb & Flag, a more than 400 year old pub, had to close due to high losses. Famous writers such as CS Lewis and JRR Tolkien once enjoyed drinking their ale there, and Tony Blair and Bill Clinton have popped in for a pint too.  The  restaurant is operated by the University’s St. John’s College.

The  college regretfully announced that the pub, which has existed in this location since 1613, could not continue due to excessive ongoing losses during the time of the corona lockdown.

Like Lamb & Flag, there are thousands of pubs and restaurants across the British Isles – in small towns and in the country, in London, Birmingham, Liverpool or Manchester, in Scotland and Wales.

The  corona pandemic has dramatically exacerbated the existing trend towards dying in pubs. Numerous restaurants, from small Indian restaurants on the high street to fish & chip shops, as well as bars and clubs have to close.

Already 10,000 catering establishments closed permanently last year, write the consulting firms CGA and Alix Partners in a new market report. A few have reopened. But the bottom line is a net loss of 5975 pubs, restaurants, bars and clubs.

The  number of business tasks has almost tripled compared to the previous year. “

The se numbers show what a devastating 2020 was,” complained Emma McClarkin, head of the British Beer & Pub Association (BBPA).

The  hardest hit are the independent, smaller pub and restaurant companies that have not been able to cope with the lockdowns, have no large financial reserves, cannot get large loans from the bank and cannot tap into the capital market.

The  dry spell is becoming too long for many.

The  first corona lockdown lasted more than three months in spring, from the end of March to the beginning of July. In many regions of the kingdom, initially in northern England, the catering trade had to close again from November due to rising virus numbers, since mid-December across the country. Restaurants are only allowed to offer take-away meals.

The  HospitalityUK association recently estimated that around 640,000 jobs were lost in the catering, hotel and leisure sectors last year. Before Corona, more than three million people were employed in the industry. This year there is another risk of death in pubs and restaurants – despite all support measures by the state. “It’s about survival,” warn CGA and Alix Partners.

Finance Minister Rishi Sunak has initiated further aid measures for companies, including a grant of 9,000 pounds (around 10,000 euros) per company, as corona bridging aid.

The  current lockdown is very likely to be extended until at least the end of March.

The re are voices from scholars who want to keep pubs and restaurants closed until Easter or until May. That would be ruin for thousands of hosts.

The  BBPA is calling all the louder for further help to save the industry.

Billions of pounds as emergency funding

Before Corona, there were around 40,000 pub businesses in the UK. Almost a third of the pubs are run by large hospitality groups, public companies such as JD Wetherspoon, Young’s, Fuller’s, Marston’s, City Pub Company and Mitchells & Butlers, as well as Greene King, Stonegate and other unlisted pub chains. Since the outbreak of the Corona crisis, the big ones have raised several billion pounds as emergency financing through loans, capital increases and bonds.

Wetherspoon announced a few days ago that it would ask its shareholders for a second capital increase, this time for £ 93 million (a good 100 million euros). Brexit supporter Tim Martin’s company with 872 pubs is losing more than £ 4 million, it writes. It has laid off 6,000 employees since the outbreak of the pandemic. Now there are still 37,700, currently almost all of them on compulsory leave. In the best-case scenario, Wetherspoon hopes to be able to reopen its pubs at the end of March, which could then generate half as much sales as before the pandemic. In the worst-case scenario, the pubs have to remain closed for much longer. In this case, Wetherspoon estimates that sales in 2021 will only reach a third of the pre-crisis level of 1.8 billion pounds.

Former Greene King boss Rooney Anand, meanwhile, is betting that the sector will recover. He’s started a new company hoping to invest £ 200m to buy closed pubs and reopen after the pandemic.

The re could also be hope for Lamb & Flag in downtown Oxford. Dave Richardson of the “Campaign for Real Ale”, which wants to preserve traditional beer bars, wants to organize a rescue operation. “We will fight to keep the pub open for residents and students so that they can drink for many years to come.”

World Cup qualification: everything you need to know about the draw

Happy Birthday – Mel Gibson: The Rise and Fall of a...

Clariant will cut another 1,000 jobs

At the start of the vaccination: you need to know that...