According to a report by the British “Chicago Tribune”, an American hid in Chicago airport for three months because he was afraid to leave the building due to the corona pandemic.

The  California man spent the time in a secure area of ​​O’Hare International Airport until he was arrested last weekend, the prosecutor said.

The  36-year-old is now charged with unauthorized entry into a prohibited zone of the airport and theft.

According to prosecutors, he landed in Chicago on a plane from Los Angeles on October 19 and has since lived in the airport building without being discovered.

On Saturday, two United Airlines employees picked up the man and wanted to see his ID. According to the “Chicago Tribune” report, he then pushed down his mask and showed the employees the ID of an airport employee that hung around his neck.

The  ID, however, belonged to the airport employee who reported him missing on October 26th.

The  two employees who found the 36-year-old called the police who took him into custody.

The  man stated that he found the ID card at the airport and that he was “afraid of going home due to Covid-19”. He reported to prosecutors that he got around by food given by passengers.

According to the Chicago Tribune report, the man lives in a shared apartment in Orange, California and has no criminal background. He is currently unemployed. According to the prosecutor, the man is forbidden from entering the Chicago airport again. He may be released again if he pays a deposit of 1000 euros.

The  trial will resume on January 27th. (Tsp)

“Traumschiff” drives away from the “crime scene”, but still loses viewers

These are the best new cars 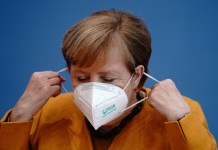 Merkel wants to close everything after Christmas – coronavirus

SHARE IN FOCUS 2: Soaring for Tele Columbus after takeover offer...