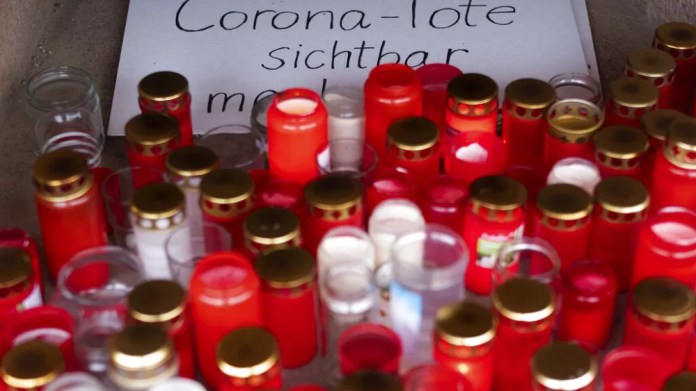 On this Saturday, the Robert Koch Institute reports 24,694 new infections with the corona virus within 24 hours and 1,083 further deaths. On the list of the Johns Hopkins University (JHU), Germany has now exceeded the total number of 40,000 deaths from Covid-19. According to the RKI, the number on January 9, 2021 is slightly lower.

Under the slogan “Make Corona Dead Visible”, an initiative has set up a memorial at the Stierbrunnen on Arnswalder Platz in Berlin-Prenzlauer Berg. According to the Berliner Zeitung, journalist and writer Christian Y. Schmidt and artist Veronika Radulovic have been organizing silent commemorations for the victims of Covid-19 since St. Nicholas Day.

There is also a Facebook page and similar initiatives in many other German cities as well as in Switzerland and Austria. In most places, the commemoration always takes place on Sundays at 4 p.m. – also on January 10th.

“As many deaths in 24 hours as two full jumbo jets”

In an interview with SWR1, psychologist Prof. Michael Witthöft explains that it is important “to put the drama into pictures” so that people understand and adhere to the Corona rules. “If we imagine that today, for example, we had over 1,000 fatalities, just for the past 24 hours, then it is comparable to two fully occupied jumbo jets that crashed over the Federal Republic. I think it is important to do that in To set a relation to make it clear how we would deal with events on another level that claim as many deaths as Covid-19 is currently doing. “

Mutant B117 since before Christmas in Berlin

As the Berliner Tagesspiegel researched, a student who came to visit his family before Christmas spread the British variant of the B117 coronavirus in the German capital. According to Carolina Böhm, City Councilor for Health in Steglitz-Zehlendorf, the positive test result of the person who had traveled from Great Britain was already available on Christmas Eve. However, the evidence that it was variant B117 only reached the district’s health authorities on January 7th.

The City Councilor for Health did not want to say how many other people the now recovered student infected. Carolina Böhm said, according to Tagesspiegel, that the other family members got sick very quickly. It is “like chickenpox: if one has it, everyone has it”.

B117 is much more contagious, but according to experts, no more dangerous than the non-mutated coronavirus. The mutated virus is detected by gene sequencing, which, however, in most EU countries – unlike in Great Britain and Denmark – is only rarely carried out.

Buying a PS5 from Otto: The status of availability and alternatives

Whatsapp: If you don’t want a new function, you have to... What Laschet’s election means for the SPD – politics