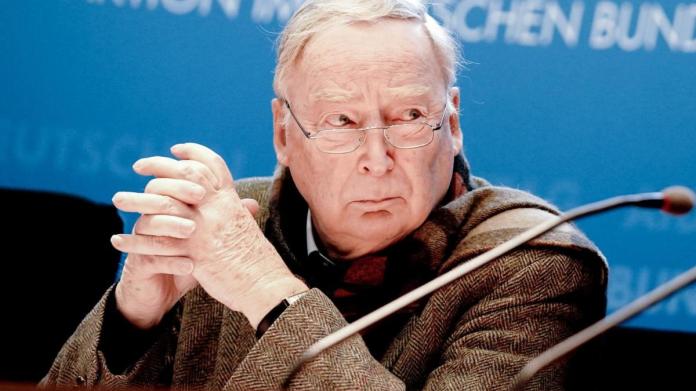 Dhe AfD took the opposite position. Even before the federal and state heads of government negotiated an extension of the lockdown on Tuesday, she called for the restrictions to be ended immediately.

“In all facilities and businesses of cultural, economic and social life in which the hygiene rules are implemented, an opening must take place immediately,” says a thesis paper that the heads of the AfD parliamentary groups in the Bundestag and in the state parliaments decided on Monday had. At first glance, this looks like sticking to the previous course.

On closer inspection, however, the four-point paper turns out to be another curve of a winding path. A turning point already marks the choice of words. In autumn it was still very radical, sometimes extremist. Bundestag parliamentary group leader Alexander Gauland used the term “Corona dictatorship”, others referred to the reformed Infection Protection Act as an “Enabling Act”.

But after this caused the party serious trouble, such slogans can no longer be found in the current paper. Rather, it is only required to “immediately end all disproportionate restrictions on fundamental rights in the context of the corona measures”.

The  facilities to be reopened are just as matter-of-factly listed – from shops and hairdressing salons to schools and museums to fitness studios as good as all – and Gauland criticized the lockdown policy as “always more-of-the-same ”.

The  verbal extremism of November is over for now, at least at this AfD level.

Suddenly no more fear of the vaccine

Much has also changed in attitudes towards vaccines. It is true that the theses paper rejects “a direct or indirect mandatory vaccination”. However, the AfD parliamentary group leaders are now giving respect for domestic research, which in the Corona context should immediately think of the Mainz vaccine company Biontech.

The  active principle developed there attacked the AfD member of the Bundestag Steffen Kotré in December like this: “This process is also a process that interferes with the genes. So we are more concerned with an experiment than with a vaccination. ”

So if there were vehement fears of a German innovation, the AfD is now demanding that the federal government must take “national interests into account when promoting research and development”, “in order to have a sufficient amount of vaccination doses and drugs available promptly”.

Such contradictions run through the entire previous pandemic development at the AfD, but are based on a consistent principle: the self-imposed compulsion to always take the most radical possible opposing position. When the federal government hesitated with the first lockdown in spring 2020, the AfD demanded that it be imposed immediately. As soon as it was in force, the party demanded its repeal in early April.

When the situation relaxed in the summer and most Germans were largely satisfied with the government, many in the AfD called for radical opposition in their own and “lateral thinker” demos. No sooner did vaccines promise an improvement in the new tense situation in autumn than AD put the vaccines under suspicion. And now that vaccination is going too slowly, “the federal government has to provide sufficient vaccine,” as the paper says.

Just two sentences about the most threatened

On its winding path, of course, the party occasionally struck stakes that could no longer be pulled out. This includes the sometimes angry AfD resistance to the mask requirement. That is one of their brand essence. Now, of course, if the AfD wants to open everything again, a mask requirement would be obvious in those locations. But there is no mention of that in the paper – only of “hygiene rules”, which the AfD has so far strictly separated from the requirement to wear a mask.

In addition, where the party argues purely in terms of content, there are needs that others also face. This can be seen in the protection of particularly endangered groups, especially old people, who so far have practically no western democracy – Germany is by no means an isolated case – effectively protected from the deadly threat posed by the virus.

The  AfD proposals for the protection of the very old or previously ill who are mobile are quite specific. For them, among other things, separate shopping times or free taxi vouchers are required in order to reduce their risk of infection in local public transport.

But the paper only contains two sparse sentences about those most threatened: “Residents of old people’s and nursing homes and people in home care must be given special protection. This can be done, among other things, by expanding the test options. ”No further details are given.

When the Rhineland-Palatinate AfD parliamentary group deputy Michael Frisch spoke on Tuesday morning about this topic, he said that protecting the homes was “a logistical challenge”.

Leaker names titles and shocks players in the shooter series

Federal Reserve: Rising interest rates, a strong dollar – and the...

The order is – that’s how Spahn wants the population to...

Home office obligation, masks indoors? What the government advises on