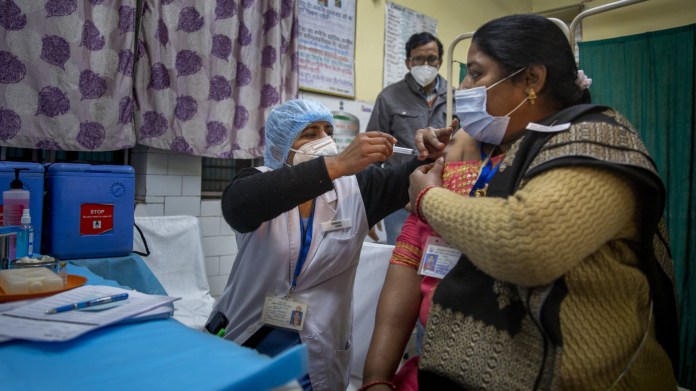 India has just approved two corona vaccines:
The -British agent from AstraZeneca and the Indian in-house development Covaxin. However, experts doubt the effectiveness and safety of Covaxin.

The -approval of the corona vaccine Covaxin developed in India has sparked a controversial debate. For the preparation of the Indian company Bharat Biotech there are still insufficient data from the third clinical test phase, it said. As a result, the emergency approval for this vaccine should not have been granted at all, claimed various health experts and politicians from the opposition Congress Party.

The -Indian regulatory authority for the pharmaceutical industry yesterday granted emergency approval to the so-called Oxford vaccine from AstraZeneca and the Indian drug Covaxin, clearing the way for the start of the world’s largest vaccination campaign.

The -vaccinations should start within a week.

The -results of clinical tests in Great Britain were used for the Oxford vaccine.

The -head of the regulatory authority, Venugopal Somani, rejected the criticism of the Indian corona vaccine. Covaxin is 110 percent safe, Somani said at a press conference in Delhi. Around 800 people took part in the first two clinical test phases. “

The -results have shown that the preparation is safe and provides a robust immunization.” According to Somani, the effectiveness will be tested on over 25,000 volunteers in the third test phase. Around 22,500 across the country have already been vaccinated. “ Based on the data we have so far, we can say the vaccine is safe,” said Somani.

According to the Indian government, up to 300 million people could be immunized against corona by the middle of the year. Doctors and medical staff as well as other so-called systemically important persons, for example police forces, are vaccinated first. Then it is the turn of people who are considered to be particularly at risk due to their age or previous illnesses.

There have been test runs in numerous vaccination centers across the country in recent days. Attempts were also made to dispel doubts about the safety and effectiveness of the vaccines.

Pooja Moriya, a nurse from Delhi, reports that she has been on duty for months because of the coronavirus, including during the lockdown. “ In the past few days we had numerous meetings about the vaccinations. It was explained how it all works. Our superiors said we shouldn’t be afraid. Because I was a little afraid at first,” says the nurse.

The -emergency license does not allow exports for the time being, said the head of the Serum Institute, Adar Poonawalla in an interview with the AP news agency.

The -government in Delhi wants to ensure that vulnerable groups in India are protected. Other countries, especially poorer ones, would therefore likely have to wait a while before receiving their first doses of vaccines from India.

Armin Laschet confirmed as the new CDU party leader – after...