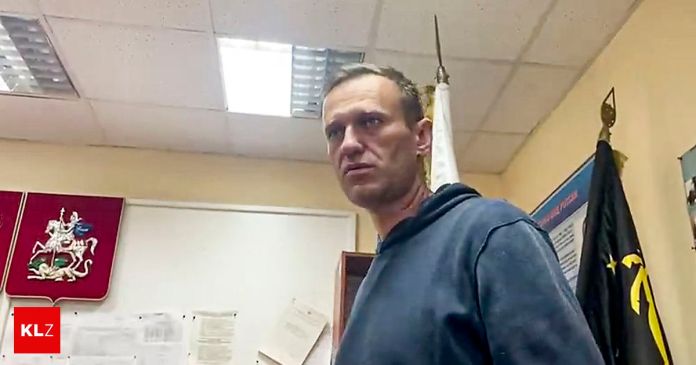 Navalny describes Putin in a Twitter video from the police station as “grandpa in his bunker” Germany and other countries are calling for the immediate release of the Russian critic of the Kremlin, who was poisoned with Novichok in Russia in August.

His whereabouts were considered uncertain for 14 hours, then it became known that the Russian judiciary had responded to the opponents of the Kremlin who had returned to Moscow Alexej Navalny makes an urgent trial directly in a police station.

Jurists criticized this as unprecedented – even by Russian standards. In a video on Twitter, Navalny complained that the judiciary in Russia had reached a new level of “lawlessness”. “I’ve often seen the rule of law ridiculed, however this grandpa in his bunker is so afraid now (…) that now simply the Code of criminal procedure torn up and thrown on the dump will, “said Navalny in the improvised court room. By “grandpa in his bunker” Navalny means the Russian president Wladimir Putin. “It’s impossible what happens here.” It is the “peak of lawlessness”.

Here the above-mentioned Twitter video, in which Navalny can be seen at the opening of the trial.

“Alexei has been in custody for 14 hours and was not allowed to make callsalthough everyone arrested has this right, “shared his Spokeswoman Kira Jarmysch previously on Twitter. Meanwhile, international voices are increasing for an immediate release.

Nawalny’s lawyers apparently had ereceived in letters about the beginning of a court hearing in the police building, which was then opened without anyone having been able to prepare.

Navalny’s lawyer, Olga Michailowa, has been complaining since Sunday evening that she is not allowed to look after her client. She will not be allowed to see him, she told Echo Moskvy radio station on Monday in front of the police station.

The  lawyer had seen Navalny at Sheremetyevo airport on Sunday, but uniformed officers prevented her from accompanying him, as was shown on a video.

Here is the arrest of Nawalny at the airport:

Human rights activists are also standing in front of the police building and have no access, said Mikhailova. She accused the police authorities of violating the law because Navalny was denied the legally provided protection.

Navalny had on Sunday left after five months in Germany, where he was recovering from an attack with the neurotoxin Novitschok. After arriving in Moscow, he was arrested.

The  judiciary had put him out to be wanted.

The  critic of the Russian President Vladimir Putin is said to have violated probation conditions in a previous criminal case while in Germany. He faces three and a half years in prison. Navalny criticizes the action against him as politically motivated.

Meanwhile, with Germany and several northern European states, the voices demanding the immediate release of Navalny increased. Russia is bound by its own constitution and international obligations to the principle of the rule of law and to the protection of civil rights, declared the German Foreign Minister Heiko Maas on Monday.

The se principles must of course also be applied to Alexei Navalny. He should be released immediately.” After his recovery, Navalny made a conscious decision to return from Germany to Russia because he sees his personal and political home there. “It is completely incomprehensible that he was arrested by the Russian authorities immediately after his arrival,” stressed Maas.

The  Russian opposition politician Navalny must be released immediately,” wrote the Prime Minister of Russia’s neighboring country Finland, Sanna Marin, Monday morning on Twitter. Russia should investigate the poisoning of Navalny and protect the opposition rights that are part of any democracy. Finland has the longest border of all EU countries with Russia.

Denmark and Sweden also demanded that the 44-year-old be released immediately. Swedish Foreign Minister Ann Linde announced on Sunday evening that she is calling on the Russian authorities to release Navalny.

The  Danish Foreign Minister Jeppe Kofod wrote on Twitter that Nawalny’s arrest was as expected as it was unacceptable.

The  Russian authorities have still not provided any answers to the questions about the poisoning. “

The  world is watching!” He added.

The  EU, the USA and the Austrian Foreign Ministry had previously called for Nawalny’s release.

The  Navalny case has led to diplomatic resentment between Germany and Russia.

The  German government and other western states speak of one with regard to the poison attack Attempted murder, in which Navalny was poisoned with the nerve warfare agent Novitschok.

The  government in Moscow rejects any involvement in the incident.

The “Brave Pharaoh” Seqenenre Taa died in chains and was slain...

Further measures against Corona: Many shops in Thuringia have to close...

Apple is “leveling the playing field” with the iOS 14 privacy... This is how Elon Musk envisions working on Mars