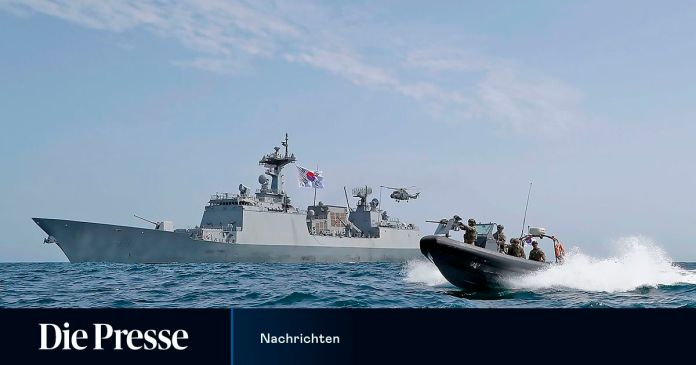 After Iran arrested a South Korean tanker, South Korea responded. A military spokesman said: “The question should be resolved diplomatically.” The deputy foreign minister should travel to Tehran.

After the Iranian Revolutionary Guards seized a South Korean tanker in the Gulf region South Korea sent the destroyer “Choi Young” there. The destroyer and its crew of 300, who specialize in the fight against piracy, arrived in the waters of the Strait of Hormuz, the Ministry of Defense announced in Seoul on Tuesday.

The task of the destroyer is to “guarantee the security of our citizens”. The warship has been in the region since the end of last year and an offensive action is not considered, said an unnamed military spokesman for the South Korean news agency Yonhap. “This question should be resolved diplomatically.”

The South Korean Ministry of Foreign Affairs has since announced that a delegation will be sent to Tehran “as soon as possible” to secure the release of the tanker and the 20 crew members in bilateral negotiations.

Previously had South Korea summoned the Iranian ambassador. At the meeting in Seoul with Ambassador Saeed Badamkhi Shabestari, the head of the office for Africa and the Middle East, Koh Kyung-sok, expressed his regret over the incident and demanded an early clearance of the ship and the release of the crew members, South Korean media reported.

The crew was safe and sound, the ambassador said before the meeting began, according to reports. The Iranian Revolutionary Guard arrested the chemical and oil products tanker “Hankuk Chemi” in the Persian Gulf on Monday on charges of marine pollution. According to the information provided by the Revolutionary Guard, the ship was directed to the port city of Bandar Abbas. The tanker had loaded 7,200 tons of petrochemical products. The ship operator DM Shipping in Busan, South Korea, rejected the allegations, according to Yonhap.

The South Korean Vice Foreign Minister Choi Jong-kun, meanwhile, plans to travel to Tehran next week on a long-planned visit. The Iranian government demands the release of billions of dollars in South Korea were frozen on the basis of US sanctions against Iran. The governor of the Iranian central bank, Abdolnasser Hemmati, put the amount at the equivalent of 5.7 billion euros.

South Korean Foreign Minister Kang Kyung Wha did not comment on speculation that Iran was trying to do that by seizing the tanker South Korea releases the frozen credits. “We have to first verify the facts and ensure the safety of the crew,” said Kang.

Big start at Schalke: who could be a role model –...

Coronavirus: These cantons are closing their ski areas

The fair should take place as a digital event

Schools should remain closed: the measures of the lockdown extension at...