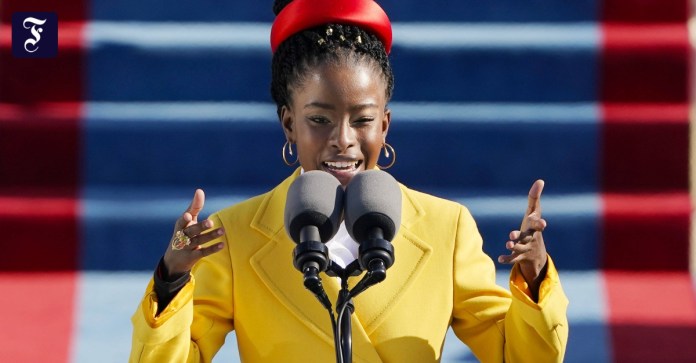 WTS Eliot once put it very aptly: “Genuine poetry can communicate before it is understood.” That lyric does something to us even before we have penetrated it meaningfully, which poems not least of prose or one A twenty-two-year-old American woman impressively demonstrated this on Wednesday afternoon in cold Washington, which was exciting in many ways.

Responsible editor for the features section.

Amanda Gorman’s poem on the inauguration of Joe Biden not only instantly became an Instagram star because she was already inspiring the world in the Eliotian sense – just her gestures when she wrapped her hands around the words and lengthened the melody of her voice, along with the rhythm of her speaking.

Draft of a future America

But the poem itself with its allusive title “

The  Hill We Climb” is part of a lyric tradition beyond the performative and at the same time urges something new, for example when the utopia of a future America is being designed. It forms a sharp contrast to the words of the president who has just resigned, who always only spoke backwards because he intended to make an allegedly outdated America great again.

Amanda Gorman also first looks back in her verses when she describes herself as a thin, black girl, descendant of slaves and the daughter of a single mother, only to look decidedly ahead. She calls on her compatriots not to look to “what stands between us”, but to what is still to come and “stands before us”.

This forward movement, sensuously implemented in the beat of the verses, is also in the title, because with “hill” is not only meant the hill of the Capitol, which a young black woman as future president would also have to climb, including Kamala Harris in her first Speech as “VP-elect” spoke. This hill is a reference to Martin Luther King’s 1963 dream speech, in which he also outlined his vision of the table of brotherhood in the red hills of Georgia in Washington.

In its whole rhythm, of course, this half-chant characterized by slave singing, gospel and blues, the poetry slam was a bow to the civil rights activist King, but the heartbeat and the emotionalization of the verses should not hide how clever the poem itself is. It works with strong images, alliterations and internal rhymes, with allusions to Langston Hughes’ “Let America be America Again”, to Lincoln, Churchill, Frederick Douglass and, in a disengagement movement, also to the “National Poet Laureate” Robert Frost, who in his poem for John F. Kennedy once pondered the fact that the country was “ours”, “before we were this country” – which is strange to some today.

What connects you to Biden

But Amanda Gorman finds the most important echo in Joe Biden himself. Not only is he the oldest American president to rule this country, and she is the youngest female poet who has ever spoken at the inauguration. That day, the two speakers in front of the Capitol combined the same themes: unity, healing, grief, hope. Biden said: “We must end this uncivil war.” Gorman’s echo: “We will rebuild, reconcile and recover.”

What they both have in common, however, is that they literally entered the world through poetry in their childhood. Because Joe Biden, who would later make a name for himself as America’s youngest Senator, was a heavy stutterer as a child, which he worked off with the help of poems by Emerson, Yeats and others. Amanda Gorman also had a speech impediment as a child. She told American journalists that it was this disorder that led her to poetry in the first place.

Amanda Gorman is at best a discovery for the rest of the world. Despite her young age, she has been very well known in America for a long time.

The  Poetry Foundation, something like the Gotha of American poetry, has been listing them for several years. At the latest when the Harvard student was named the first “National Youth Poet Laureate” in 2017, people were talking about her nationwide.

The  link to Kamala Harris can be found in California. Because both hail from there, and Amanda Gorman was an award-winning poet in her hometown of Los Angeles when Harris was California’s attorney general.

Biden and Harris have recently been charged with neglecting their views on the arts. This accusation was outdated on Wednesday. As is well known, the wife of the former Vice President Pence once caused a disgrace with a children’s book.

The  new Vice President, however, is open to the arts and science. And its President, who is only the fourth after Kennedy, Clinton and Obama to have his inauguration accompanied by a poetry reading, has set a sign that can be seen from afar with Amanda Gorman.

Papa Hirscher: “At the moment, motorcycling is more important to Marcel”

Loosen lockdown, but how? Debate about opening strategy

Four years of President Trump – “Trump has exposed and reinforced...