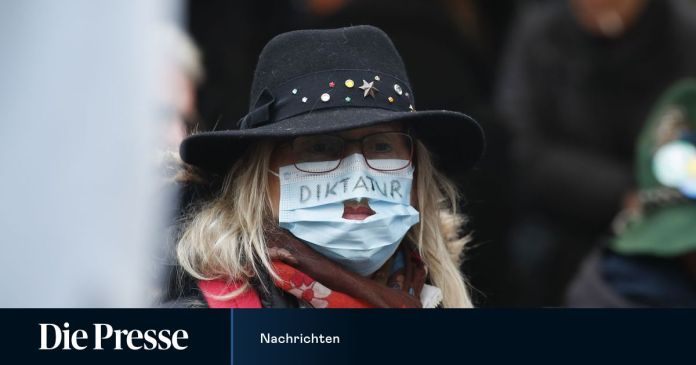 Interior Minister Nehammer warned on Friday against the mobilization of radical groups.  The  police will be deployed with a large number.

This Saturday, Vienna is the scene of several anti-corona demos, for which there are registrations with a total of up to 30,000 participants.

The  largest rally will take place at Heldenplatz in the city center, where applicants have given a number of manifestants of up to 20,000. Interior Minister Karl Nehammer (ÖVP) announced on Friday a particularly strong police presence and warned against the mobilization of radical groups.

Among other things, the mobilizing groups would include representatives of the black bloc, but also links against the state such as the Reich Citizens Movement. Right-wing extremists mentioned the Identitarian Movement and “

The  Austrians DO5″ in particular.

The ir encounter holds a “potential for conflict that should not be underestimated,” warned Nehammer.

The  rally on Heldenplatz begins at 2 p.m., where it also ends at 7 p.m. In between, the demonstrators want to complete a lap on the ring against the direction of travel. At Maria-

The resien-Platz there is a demonstration with up to 5000 participants from 5pm to 10pm with the title “For a free Austria”, on Karlsplatz again demonstrators gather from 6pm to 10pm “to protect the Austrian constitution and all of us Human rights “. A counter-demo entitled “No stage for conspiracy ideologues” with up to 300 participants has also been registered. It starts at Graben and goes to the corner of Löwelstraße and Josef-Meinrad-Platz.

Influencer Melina Sophie has a forehead tattoo – it’s a QR...

Extreme Networks is sleeping through the end of Flash

Odermatt in a league of its own – An Azzurro points...

Since he was 14: Roman Lochmann suffers from derealization!

The first price jump has already been determined