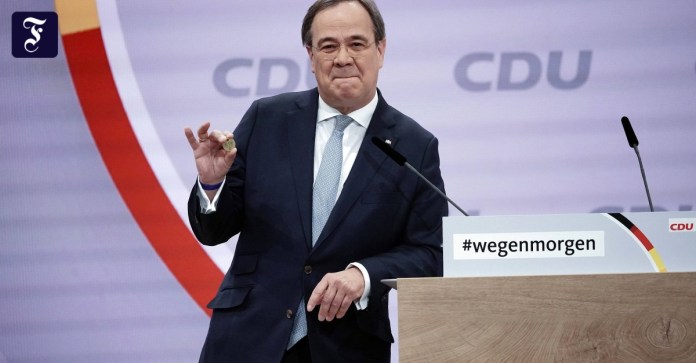 NNorth Rhine-Westphalia’s Prime Minister Armin Laschet is to succeed Annegret Kramp-Karrenbauer as the new CDU leader.  The  59-year-old prevailed on Saturday at the digital CDU party convention in a runoff against the former Union parliamentary group leader Friedrich Merz.

The  decision still has to be formally confirmed by postal vote.

Previously, the North Rhine-Westphalian Prime Minister Armin Laschet had emphasized his experience as head of government in his application speech for the CDU chairmanship. “You have to master the tools of the trade of a middle-class politics,” said Laschet. He referred to the negotiations to phase out coal or the fight against crime in North Rhine-Westphalia. Laschet is the only one of the three applicants to hold a government office.

The  party is not a one-man show”

The  Chancellor’s reputation can be summed up in one word: trust.

The  CDU will not be chosen for the merits of the past. Laschet advocated a “decade of modernization”.

The  CDU had to become a “think tank” again.

The  whole breadth of society is no longer reflected in the party, said Laschet. He wants to lead the party as a “team captain”.

In his application speech for the party chairmanship, Friedrich Merz swore the CDU to win the next federal election: “As German Christian Democrats, we are determined to lead this next federal government again,” said Merz with a view to the upcoming election in autumn. In his application speech for the CDU chairmanship, Merz also clearly opposed right-wing populism: “

The re will be no cooperation with the AfD with me,” said Merz. This applies to the state parliaments, the Bundestag and also the European Parliament. And the voters should know: every vote for the AfD is half a vote for red-red-green.

In his application speech for the CDU chairmanship, Norbert Röttgen conjured the unity of the party. He was “not a camp”, said Röttgen at the virtual party conference of the Christian Democrats. “Cohesion is also essential for us”, says Röttgen and emphasizes: “I want to integrate.” And it is clear that with the election of the new chairman “the competition in the CDU is over”. From now on there is only competition with the other parties. In his application speech for the CDU chairmanship, Röttgen focused on “future skills”. That’s what it’s all about, says the foreign policy maker at the virtual party congress of the Christian Democrats. It is about orientation, leadership, ideas and the will to shape.

Before Your Eyes – indie game with innovative blink controls will...

Germany: number of cases rises to over a million; Trump:...

Coronavirus: Berset: “It is normal that not everyone is on the...