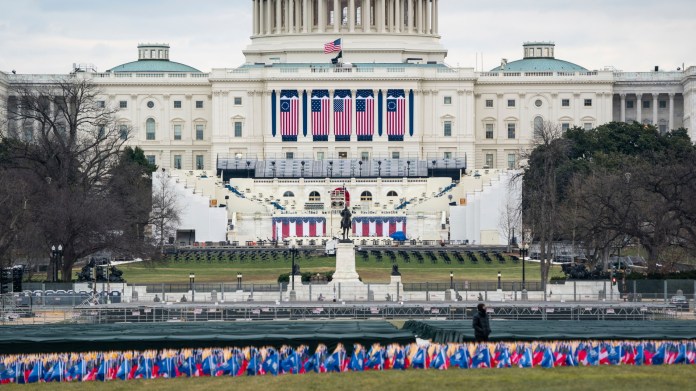 No imposing parade, no balls, no spectators: at the inauguration of US President Biden, nothing is like usual. Pop stars – and a TV gala – are supposed to create a good atmosphere.

As in the Superbowl final five years ago, Lady Gaga will sing the national anthem at the inauguration of future US President Joe Biden. An appearance by Jennifer Lopez is also planned.

But that was it in terms of glamor and glamor: Corona-related and because of gigantic security measures, it should be an inauguration ceremony without any pomp. In other words: no imposing parade, no festive balls and, above all, no cheering spectators.

Congressmen are only allowed to bring a single guest. Instead there will be an art installation in front of the Capitol: a sea of ​​flags. “ The  inauguration committee has announced that there will be a field of flags along the National Mall,” said political scientist Lara Brown of George Washington University. “191,500 flags and multiple pillars of light represent the people who cannot travel to Washington and all 50 states.”

The re is no tea drinking in the White House

The  daily routine follows the rules of a centuries-old tradition.

The  Biden family spends the night in the guest house and starts the day with a church service.

The  traditional tea drinking in the White House with the outgoing presidential couple is canceled because Donald Trump boycotts Joe Biden’s swearing-in ceremony. Allegedly he wants to leave the White House in the morning and stage his own farewell party on a military airfield outside Washington.

The  actual swearing-in ceremony begins at noon on the steps of the Capitol. First, Vice President Kamala Harris is sworn in. “Exactly at 12 o’clock the future president takes the oath of office, gives his speech and then there is a prayer. Since the 19th century, since ‘

The  Star-Spangled Banner’ has been our national anthem, this has usually been the end of the ceremony”, explains Brown.

TV show and fireworks at the end

Joe Biden will then give his eagerly awaited inaugural address.

The  press release said the speech reflected “the beginning of a journey to heal the soul of America and unite the country.” “

The  tone will certainly be serious and solemn,” says Brown.

The  historic day ends with a TV show hosted by Tom Hanks – with contributions by Jon Bon Jovi and Justin Bieber and further speeches by Biden and Harris. And this time the Americans also have to follow the final fireworks virtually on television. Xiaomi Mi 11: First smartphone with Snapdragon 888 should appear in...

The Eintracht victory in Bielefeld in the analysis: Football 2021 |...

Long Black Friday lines on the Alex – good for sales!...

Thanks to Yabo-Hammer! Bielefeld wins against Hertha BSC

Who will win the grand finale on December 22nd on RTL?

Before the vote on the higher broadcasting fee in Saxony-Anhalt