Bitcoin price fell briefly below $ 35,000 on January 15th after an apparently stronger US dollar put pressure on the world’s largest cryptocurrency. However, the price of BTC found a level of support at $ 34,300 that cushioned the sudden fall somewhat. At the time of writing, the Bitcoin price is trading at just under $ 36,000.

Bitcoin price slump brings the $ 30,000 back into play

Only yesterday it was possible for the Bitcoin course to test the $ 40,000 again, which made a bullish scenario in the form of a continuation of the upward trend more likely. But today Bitcoin proved once again that you should never be too sure of your cause with it.

Today’s slump has brought a possible bearish scenario back into play and the Bitcoin price is again trading in a corridor that had formed at the beginning of the week. This currently has $ 30,000 as a lower limit and $ 40,000 as an upper limit.

But even if this slide again creates uncertainty in the market, it is also healthy at the same time. Michaël van de Poppe noted in a series of tweets that the Bitcoin price consolidation is very healthy for the market after we witnessed the massive impulse move to $ 41,500.

In short, this is not necessarily a bad sign for the BTC bulls on the market and in the long term, everyone agrees, things can only go up for the number 1 cryptocurrency.

The  renewed downturn in Bitcoin price coincided with an upswing in the US dollar currency index (DXY), which stands on the shoulders of President-elect Joe Biden’s $ 1.9 trillion stimulus package. Despite the severity of this dollar expansion, the markets appeared to be responding positively to the plans, pushing the DXY up at the expense of Bitcoin, to which it is typically inversely correlated.

The  dollar is breaking out on multiple time frames. A fairly strong rebound from a multi-month support area. Some argue that this is bad for bitcoin, gold, and risk assets […].

Young also noted that in derivatives markets, investors “buying the dip” created additional headaches, which could dampen prospects for a relief rally.

However, if we zoom out, the Bitcoin price has so far underperformed compared to previous bull cycles, so that very few believe that despite a possible correction, the $ 42,000 was already the end of the flagpole. According to the on-chain analytics resource Ecoinometrics, this gives hope for further significant price increases at BTC.

From the growth of the previous cycles we still have a 7-fold upside potential.

To trade Bitcoin and other cryptos

Ferris wheel in Berlin’s Spreepark is being renovated 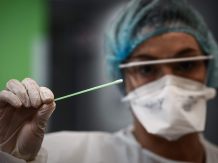 Prevalence study: 228,000 people infected with corona in Austria in mid-November...

Corona number of cases in Germany: the seven-day incidence rises to...