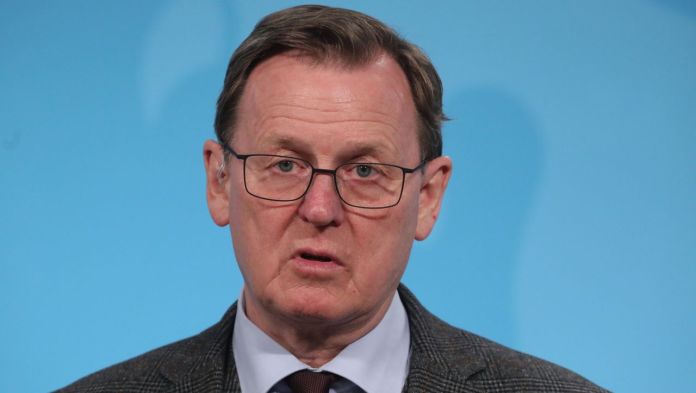 Only a few days after the hype about the Clubhouse audio app began in Germany, the first top politician got himself into trouble with casual chats. And the criticism of Thuringia’s Prime Minister Bodo Ramelow after his appearance in the app is not ebbing – on Monday it was also loud in Ramelow’s own cabinet.
The  left-wing politician has now apologized several times for his statements on Saturday night. Ramelow has been registered with the US social media app since January 21. In the “Trash and Feuilleton” panel discussion at the weekend, he said that he was playing “Candy Crush” during the Prime Minister’s Conference on the corona crisis and called the Chancellor “Merkelchen” elsewhere.

The  latter was taken out of context, said Ramelow of the dpa. Later he sang a song with the group.

The  “Welt am Sonntag” reported on the chat and quoted Ramelow. This was followed by numerous sharp media reports, political criticism, especially from Thuringia, and the accusation that the Prime Minister did not act responsibly in the most important deliberations in the fight against the pandemic.

Thuringia’s Interior Minister Georg Maier (SPD) told the editorial network Germany: “If it turns out that Bodo Ramelow is playing mobile games during the Prime Minister’s Conference, then he should check his behavior.”

The  situation is too serious for that. Meanwhile, Ramelow tried aggressively and with numerous apologies to keep the damage as small as possible.

“From now on, when I turn on this format now, I notice that in the back of my mind I have the learning curve from the day before yesterday and yesterday,” said Ramelow on Sunday when he performed again at Clubhouse.

He explicitly apologized for the phrase “Merkelchen”: “A smart woman has just conclusively explained the actual faux pas of my clubhouse chat to me on @clubhouse_de and it convinced me,” tweeted Ramelow on Sunday evening. “To belittle the Chancellor’s name was an act of male ignorance. For this, I sincerely apologize. ”
On the other hand, the fact that he sometimes plays “Candy Crush” during the federal-state consultations is no excitement and no secret either. If you know that a prime ministerial conference currently lasts around ten hours and involves a lot of idle time, “then I am happy to admit that one person is playing Sudoku, the other is knitting or crocheting or doing something else – and I just play Candy Crush.”

Thuringia’s CDU boss Christian Hirte considers this to be disrespectful and irresponsible. “It is either an expression of arrogance of power or fatigue,” wrote Hirte on Sunday on Twitter. Fighting the corona pandemic is about life and death as well as the livelihoods and the future of a generation of students. “Anyone who understands his office as prime minister in this way is losing the trust of the citizens,” wrote Hirte.

The urer asked on Monday about the “self-control of some politicians” when it comes to the Clubhouse app. “Just as Robert Habeck once uninstalled Twitter because he lacked the discipline for this app, similar questions arise when Philipp Amthor (CDU) or Bodo Ramelow serenades at night,” said the dpa member of the Bundestag.

Ramelow’s revelations gave an idea of ​​”how things are going with the level of discussion in the escalating prime ministerial circles,” he said. “

The  fact that this round has de facto shifted a large part of the legislative functions in Germany from the Bundestag and Landtag to the back room is completely unacceptable.

The  decisions and the discussion about them have to go back to the parliaments, «said

The urer of the dpa. In doing so, he repeated a demand made again and again by the liberals.

Kriftel: Danger of congestion on A 66 between Krifteler Dreieck and...

Charges of double attempted murder: six shots for a slap in...

Poor, rich girl: the fate of Princess Leonor of Spain