Because of the high number of new infections, Brandenburg significantly restricts the freedom of movement of citizens in extreme corona hotspots, but lifts the curfew.

The nightly curfew from 10 p.m. to 6 a.m. will no longer apply in the future. This was announced by Prime Minister Dietmar Woidke (SPD) on Friday. In addition, there is the 15-kilometer leash for risk groups and the contact restriction to a person outside the household.

For residents of rural districts and urban cities with more than 200 new infections per 100,000 inhabitants within a week, tourist travel and sports outside a radius of 15 kilometers from the municipality will be prohibited in the future, said Prime Minister Dietmar Woidke (SPD) on Friday after the cabinet meeting in Potsdam.

► First delivery of the Moderna vaccine for Berlin announced

“The main thing is to avoid winter sports excursions like the ones we have experienced in recent days,” stressed Woidke. This restriction applies if the high 7-day incidence persists for five days. Shopping and visits to the doctor are still permitted outside this radius.

Ten districts and the three cities of Potsdam, Cottbus and Frankfurt (Oder) would currently be affected. The previous restrictions on restaurants and cultural and leisure facilities, among others, will continue to apply until the end of January.

Government crisis over for the time being: Draghi takes over the...

March 8th in Germany: Oprah interview with Meghan and Harry –... 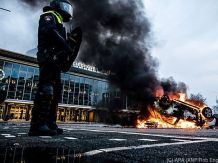