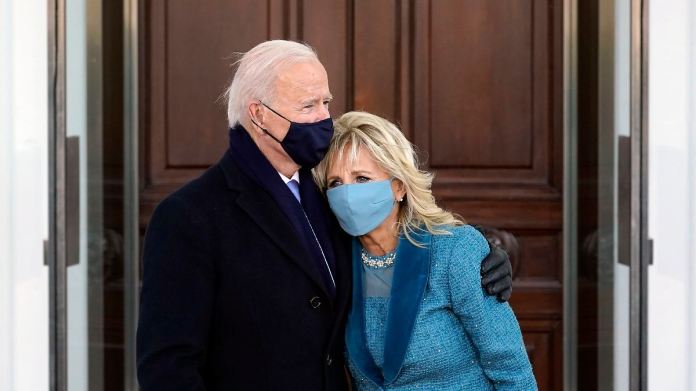 Ten seconds of waiting time – and yet a protocol breach. When Joe Biden wanted to enter the White House for the first time on Wednesday, he initially stood in front of closed doors. That should have been due to one of the last dismissals of the Trump presidency.
On the first day as US President in particular, attention is paid to every word, every detail. Joe Biden was no different on Wednesday, when he was sworn in as head of state at 12 noon. His first speech in office, the clothes of First Lady Jill Biden, the invited guests – all of this was closely watched by the press and experts.

A minor mishap did not go unnoticed: When Biden and his wife Jill wanted to enter the White House after the swearing-in ceremony and a visit to the Arlington War Cemetery, he found himself in front of closed doors. This moment lasted only about ten seconds, reports the “New York Times”. And yet he had his own story.

Lea Berman, who worked in the White House under George W. Bush, speaks to the newspaper about a breach of protocol. Because actually the door should have been opened for the president’s family when they stood in front of the north portal of the new residence.

The  change of head of state in the White House is usually carried out under great time pressure.

The  outgoing President is master of the house until 12 noon on the day of the swearing-in, followed by his successor. Even if the moving boxes are packed beforehand, there are only a few hours left to prepare the seat of government. In this case, however, there was also the fact that the chief caretaker, who usually greets the newcomers, had been fired only hours before, as the “New York Times” writes.

From the Trump Hotel to the White House

At around 11:30 a.m. local time, just half an hour before Biden’s swearing-in, Timothy Harleth was told that he was no longer needed, the newspaper quoted Insider as saying. Biden therefore wanted to recruit new staff that deal with staff issues in the White House and its budget.

Actually, it’s not a political post. However, Harleth was previously a manager at the Trump International Hotel in Washington. First Lady Melania Trump brought him to the White House in 2017. Harleth himself emphasized that his loyalty does not apply to a specific president, but to the office. However, his previous activity made a takeover by Biden highly unlikely.

It is not entirely clear whether Harleth’s dismissal was the main reason for the breach of protocol at the west portal of the White House.

The  mini-scandal, however, seems to be typical of the chaotic change of power that was marked by Trump’s unwillingness to admit defeat.

The  elected president also refused his successor the traditional reception in the White House.

In the meantime, however, the new owner has at least redesigned the oval office. This includes not only new pictures and busts, but also the fact that he banned a button from the president’s desk that Trump could use to get a Diet Coke.

Why do some circles vaccinate much faster than others?

Combination of pandemic and Brexit puts Johnson under pressure

Giulia Siegel: Your friend had to be resuscitated – “Thought he...

Trial of the night of the riot in Stuttgart: stolen unconscious...