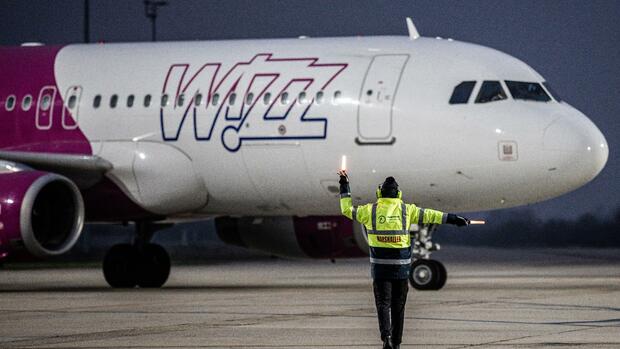 The Hungarian airline is withdrawing voting rights from a large number of shareholders because of the consequences of Brexit.

Frankfurt Many shareholders of the airline Wizz Air are getting unusual mail these days. The board of directors of the Hungarian low-cost airline started on December 29th to inform shareholders that important voting rights were being taken from them. At least 60 percent of the shareholders should receive the letter with the title “Restricted Share Notices”.

The tough step is a consequence of Great Britain’s exit from the EU. It is true that the UK and the EU reached an agreement just before Christmas and thus at the last minute that regulates trade relations between the EU and Great Britain. The continuation of air traffic was also agreed.

However, the subject of “ownership” remained open. The EU stipulates that the majority of the shares in an airline must be in European hands, otherwise important traffic rights will be lost. After Brexit, British shareholders now belong to the group of third countries and are no longer EU shareholders.

Both sides have agreed to discuss possible liberalization of this requirement in the coming months. But those responsible at the airlines cannot and do not want to rely on that. They fear for their traffic rights and therefore take precautions.

According to its own information, when Brexit comes into force, Wizz Air has around 80 percent shareholders who come from non-EU countries. To be on the absolutely safe side, they want to restrict 60 percent of the shareholders in their rights. In the future, you will not be able to attend the Annual General Meeting, speak or vote there, according to a company announcement.

No say in important decisions

The British rival Easyjet is also forced to withdraw rights from some of its shareholders. However, the extent is significantly less here. According to the company, 52.98 percent of the shareholders currently come from non-EU countries – Great Britain included.

Since the board of directors has set a limit for shareholdings outside the EU of 49.5 percent, some of the shareholders here also receive mail from the airline. The company follows a fixed rule: if you were the last non-EU citizen to acquire shares in Easyjet, you must now be the first to waive your voting rights (last in, first out).

The Irish Ryanair has so far not provided any current information on the shareholder structure. In the summer, the management announced that 53 percent of investors come from the EU – although the British were included. The low cost operator is known to have many UK shareholders.

That is why the company wants to withdraw rights from investors here too – quite radically. With effect from January 1, 2021, all shares held by non-EU citizens would be treated as “Restricted Shares”, according to an information sent to shareholders on December 29. This will apply until the board of directors can no longer see any risk for the airline’s licenses and rights from the EU’s owner requirements.

The situation is somewhat different at the British-Spanish airline group IAG (British Airways, Iberia, Vueling, Aer Lingus). There it is hoped that the majority of central positions on the administrative board will be filled with EU citizens . The responsible authorities in Spain and Great Britain had approved the procedure and the EU had been informed about it, according to a statement on December 31.

It remains to be seen whether that will be enough. At IAG, shareholders from Great Britain could still face the threat of having their voting rights withdrawn. In any case, people in the industry currently do not really believe that the EU will actually relax the strict ownership requirements. After all, there are similar rules outside of the EU.

Despite the partially still unresolved situation, the following applies to travelers: they do not have to fear that their planned flight to or from Great Britain will not take place due to Brexit. The Brexit agreement creates security here. Neither Brussels nor London is interested in putting more obstacles in the way of air traffic, which is already heavily polluted because of the pandemic.

More: Corona aid for aviation: Why money alone is not enough

What ARD, ZDF and Deutschlandradio spend money on

No radius of movement in Thuringia? Interior Minister Maier rejects...

A boy enchants the network: tearful jubilation over Christmas present